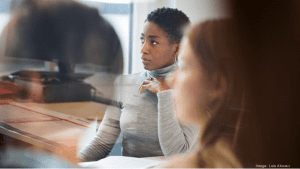 Startups raised record amounts of funding last year, but female founders got a smaller share of the pie than in 2019, according to a new report.

The proportion of dollars invested in women-led firms fell in 2020 from the year before, All Raise said in its annual diversity report Tuesday. Meanwhile women, Blacks and Latinx people still comprise a tiny share of the people making investment decisions at venture firms, according to the San Francisco nonprofit, which promotes gender equality in the tech and venture industries.

Among the key findings in All Raise’s report:

“Last year was the third consecutive record year for venture money deployed to U.S.-based companies, but it wasn’t going to female founders,” All Raise CEO Pam Kostka told the Business Journal. “They got less money at every stage, from seed stage to unicorns, and a tiny, tiny percent went to Black and Latinx founders.”

Part of the reason for the industry’s backslide on diversity last year was that venture firms focused on their existing networks and portfolio companies during the pandemic, said Kostka and Jenny Abramson, founder and managing partner of venture firm Rethink Impact.

“People went insular,” said Abramson, whose firm only invests in startups that have at least one female founder. “They invested more money in the people and the networks that they already knew. In a world where less than 14% of venture capitalists are women, the resulting numbers are not surprising.”

Compared with their male colleagues, female venture capitalists invest in double the number of women-led startups, Abramson said. Those startups aren’t hard to find. After Rethink closed its second fund in the middle of last year, it reviewed pitches from nearly 1,000 companies that had at least one female founder, she said. The firm only invests in four or five startups a year, so it couldn’t back even 1% of them, but it referred some of them to other investors.