Read the online version in the February 2021 edition out now!

Technology talent is moving to Madison in a big way, and that has real implications for building a 21st century economy. 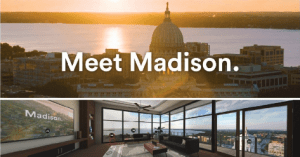 In 2019, the city gained an average of 1.02 tech workers for each one who left. In 2020, that number jumped to 1.77 — a 74% increase — according to a report from Bigtechnology.com, which is based on LinkedIn data. More surprising is that cities that were expected to grow in tech actually failed to live up to their promise, as Sacramento, California; Richmond, Virginia; and Austin, Texas all paled in comparison to Madison.

In another report from U-Haul, people coming to Wisconsin in one-way U-Haul trucks outpaced those leaving. Moves to the state increased by more than 2% during the past year, while departures dropped by more than 1% from 2019.

According to Zach Brandon, executive director of the Greater Madison Chamber of Commerce, the influx of talent to our area comes from three main channels of growth: companies like Exact Sciences that choose to relocate to Madison; companies looking for second headquarters, such as Zendesk; and companies that begin here and organically grow here from the ground up, such as Epic Systems.

“I think most interesting, and one that probably pays the highest dividends, is the ‘grow your own model’ such as Epic, EatStreet, Fetch, and Ionic,” states Brandon. These are companies that are raising a lot of capital and consistently hiring new employees. “The attempts to lure these companies away from Madison are frequent and nonstop,” he says, “but they continue their commitment to Madison and are doubling down in their investment in the community.”

While the growth comes from different channels, it is not new, according to Brandon. “Seven or eight years ago, we were saying Madison was on the cusp of being a world-class innovation hub, and we believed Madison would define innovation and technology in the Upper Midwest in the decade ahead,” he says. “We’ve always taken the long view and we’re not going to get too focused on a singular data set.”

So, what is the magic behind recruiting and retaining talent in Madison? Shelly Sprinkman, a broker and principal of Sprinkman Real Estate, works with tech companies to bring employees to the area. Sprinkman says it’s one thing to talk about everything Madison has to offer — bike paths, lakes, unique neighborhoods, and low urban density — it’s another thing to show it. Her office relies on virtual tours of neighborhoods, schools, and Matterport 3D videos of homes to give prospective employees a clearer picture of what their money can buy in Madison.

“People are buying houses in Madison sight unseen,” Sprinkman says, “because technology enables them to get a great idea of what they are buying.”

Along with company recruiting videos, hiring managers have many tools at their disposal for getting prospective employees to understand the area. A video from the chamber highlighting innovation and ingenuity touts Madison as the “ground level for the next big thing.” The virtual tools that most employees have become accustomed to during COVID-19 social distancing requirements are the same tools recruiters are using to lure people.

The end game is a stronger economy for all of Madison because attracting more tech talent means a healthier, more diverse economy that doesn’t depend on technology, but uses technology to grow the entire community. “For every job that we create and recruit in the tech sector,” says Brandon, “we know that 2.2 non-tech jobs are created.”