InsideWis: A Thanksgiving week appeal to the great techie in The Cloud 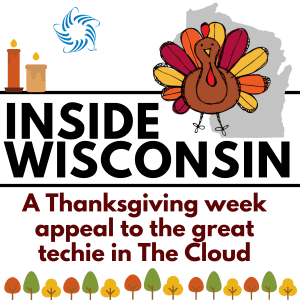 MADISON – A techie’s Thanksgiving season prayer to the Great CIO in the Sky:

As we (un)gather this Thanksgiving week over socially distanced meals, let us count the blessings of our digital age… using zeros and ones only, of course.

We’re grateful for Facebook most of the time, except when “friends” turn election-year ugly, and FaceTime for connecting so many people during the pandemic.

About 100 million TikTok users are thankful for online dancer Charli D’Amelio, although at least that many people have watched and re-watched “A Charlie Brown Thanksgiving” since it premiered in 1973. Snoopy dances, too.

We are thankful for Alexa, Google Assistant and Siri, until they get a little nosy, and Snapchat, unless you have teenagers who don’t realize self-deleting photos are stored on servers forever.

We are thankful for the iPhone, iPod, iTouch, iPay, iCloud and “the cloud,” which still seems a bit ephemeral and even heaven-like to those who store their data in it.

We are grateful for software, hardware and middleware, but not vaporware or malware.

Thank you for sending us the late Steve Jobs, re-shored jobs, open-collar jobs and COVID-era jobs, which may or may not be short-lived.

We are grateful for hackers (the white hat type), gamers, programmers and coders, but not scammers.

We thank you for robots, cobots, chatbots and Showbot, which all trace their lineage to Tonka’s GoBots from the 1980s… well, maybe not.

We thank you for tech “wearables,” such as smartwatches, health monitors and activity trackers the likes of Oura Smart Ring, Lynq Tracker and Mojo contact lenses for augmented reality … a whole new class of holiday gifts for that special techie someone in your life.

Thank you for virtual meetups, startups, scaleups and stock market “ups” since the COVID dive in March – a phenomenon driven, in part, by initial public offerings of tech stocks.

We are thankful for bytes, gigabytes, terabytes, petabytes and pizza bites for hungry coders who stay up all hours making the latest applications work.

Thank you for Yahoo, Yammer, Yelp and YouTube, and for Zendesk, Zillow, Zoho and Zoom.

We are grateful for Flickr, Tumblr, ReviewR, Raptr and WeavR, and hope that someday in your infinite wisdom you supply them with that missing “e,” which we can only imagine was taken away as punishment for past sins.

Thank you for inventing “selfies,” those funny self-portraits people take with their mobile phones or tablets – sometimes after a couple beers. For those who need to capture a broader view, thanks for extended and 3D selfies.

We are thankful for the “sharing economy,” sometimes called the peer-to-peer economy, through which people can share rides (such as Uber and Lyft), accommodations (such as Airbnb) and more through sites such as Rover, Task Rabbit and RVshare.

We are thankful for .net, Netflix, NetLingo, networks both human and virtual, and Netscape, a web browser that was one of the industry’s first initial public offerings in 1995, and which helped pave the way for others.

We are humbled that so many tech terms or names refer to things found in nature, such as Amazon, Apple, bug, worm, Nest, spider, tree, cloud, virus, ecosystem, Vine and even Samsung, which is Korean for “three stars.” Now you know.

We are thankful for Cyber Monday, which follows Black Friday and seems to start earlier and extend longer each holiday buying season. On the other hand, we can do without cyber-theft, cyber-bullying, cyber-punks, cyber-stalkers, cyber-terrorism and cyber-attacks.

We are thankful for AI, SaaS, CRM, UX, MFA, API, GIF, SEO, USB, VPN, 5G, URL, SQL and many other computer-age acronyms that relatively few people understand but still use every day.

Finally, and perhaps most of all, thank you for a few days in which we can choose to disconnect and contemplate what’s important in life.