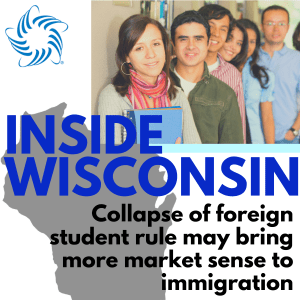 MADISON, Wis. – Some people would be tempted to blame pointy-headed campus intellectuals for the abrupt demise of the Trump administration’s attempt to block most foreign students from entering the country.

Not unless you think of the U.S. Chamber of Commerce, the University of Chicago, Johns Hopkins University, Stanford University and dozens of major businesses from coast to coast as bastions of liberalism.

Proposed and rescinded in a little over a week, the Department of Homeland Security rule would have required international students to transfer or leave the country if their schools held classes entirely online because of the COVID-19 epidemic. Students panicked, major companies complained, and universities and state attorneys general filed lawsuits.

The result was a dramatic reversal of a rule that would have kept hundreds of thousands of foreign students off U.S. campuses, including about 5,800 students at UW-Madison, and further complicated a fall semester that was already hard to manage from fiscal as well as educational perspectives.

Was the rule issued due to fears foreign students would import more coronavirus? Perhaps, but the United States is now the world’s leader in new infections. We’re doing a regrettably fine job of spreading it ourselves.

Was it because of rising tensions with China? That’s also a possibility, and there have been instances of student espionage over time, but international students flock to the United States from everywhere in Asia, Europe, South America, Africa and beyond.

More likely it was the latest wrong-headed assertion that foreign students take away jobs from native-born Americans. In fact, the opposite is true. Highly-skilled immigrants add enormous vitality to the U.S. economy and have done so for decades – researching, developing, producing, managing and leading in what has become the world’s most enduringly innovative economy.

That message was delivered two months ago by a group that looked a lot like the business coalition that helped to bring down the Trump administration rule this week. Nearly 325 employers, trade associations, higher education associations and technology groups (including the Wisconsin Technology Council) joined in a letter to Trump and three Cabinet secretaries.

The letter stressed the importance of keeping the doors open to legal immigrants and students who contribute to economic growth. It defended the 50-year-old L-1 visa, which allows companies to transfer international employees within the same firm; the 66-year-old H-1 visa class, which allows firms to hire foreign-born professionals; and the 73-year-old F-1 visa, which permits “employment for practical training” for international students.

It quoted studies from free-market institutions such as the University of Chicago, the Wharton School of the University of Pennsylvania, the Cato Institute, George Mason University and others that document the contributions of foreign talent to the United States. For that to happen, of course, that talent must be permitted to stay.

“The United States dwarfs all other advanced economies in the world in welcoming new inventors, with about 10 times that of Germany, the next highest country,” the letter read. China, in contrast, attracts virtually no immigrant inventors while its best and brightest aspire to go elsewhere.

According to the National Foundation for American Policy, a non-profit, non-partisan organization, one-quarter of the founders of billon-dollar-plus American startups were once international students.

One familiar name is Elon Musk, founder of SpaceX and Tesla, who studied at Wharton (Trump’s undergraduate alma mater, by the way). Musk’s SpaceX was recently valued at $36 billion and employs about 8,000 people.

Noubar Afeyan, founder and CEO of Flagship Pioneering, which has $34 billion in aggregate value, went to the Massachusetts Institute of Technology. Among Flagship’s portfolio companies is Moderna Therapeutics, which is developing the experimental COVID-19 vaccine touted this week by Dr. Anthony Fauci, the government’s top infectious disease expert.

The effects of COVID-19 on U.S. innovation and economic output will require the best talent and workforce the nation can muster. The reversal of the foreign student rule was the first step toward reaching that goal. Now, perhaps, the coalition will stick together long enough to bring more market sense to the nation’s immigration rules.