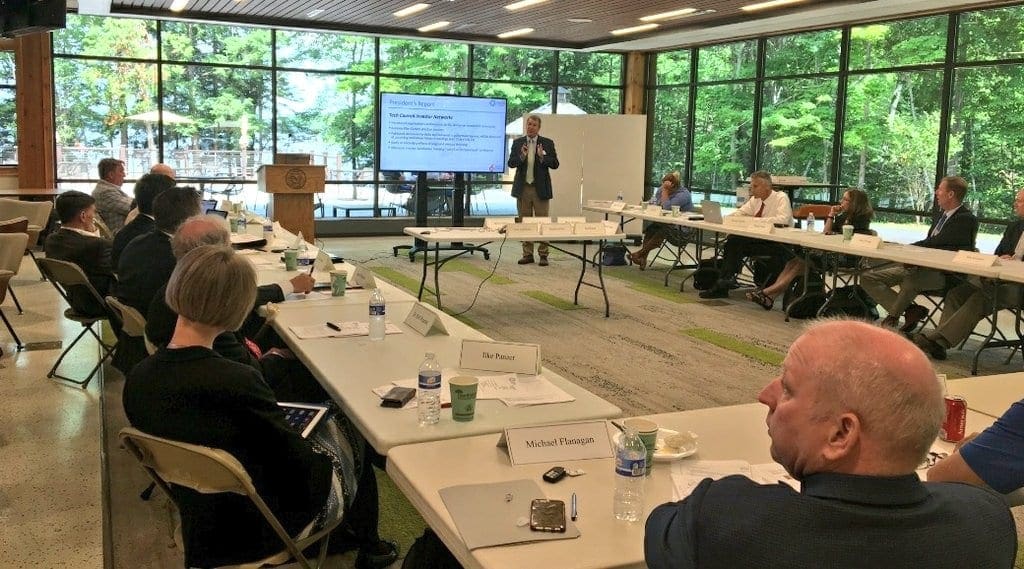 RHINELANDER, Wis. – You know you’ve entered a different kind of campus when a roadway sign at Nicolet Technical College warns motorists of an approaching crossway for both people and bears.

Bears aren’t signing up for classes at Nicolet, which is spread over a heavily forested site in north-central Wisconsin, but roughly 2,000 students are enrolled there and thousands more people attend events or courses during a typical year.

Part of what draws them to Nicolet is a flexible approach to learning and training that helps students along their diverse career paths while recognizing that employers need to know they’re hiring workers who understand the basics of their trade.

Nicolet is on the way to a broader adoption of “competency-based education,” an approach that awards college credit based on competency versus classroom time. It is a system that values demonstrated knowledge, skills and abilities over “seat time,” and which allows for learning to take place online, in hands-on settings or in the classroom at starting times outside a traditional semester structure.

Not only is competency-based education taking root at Nicolet, which began phasing into specific programs in January, but in other colleges and universities in Wisconsin.

Nelson noted the standard credit-hour approach to higher education was born of an early 20th century Carnegie Foundation movement to better track how professors were compensated. The so-called “Carnegie Unit” wasn’t driven by what educational methods worked best for students, but how to bring order to pay and retirement calculations.

Today, the needs of students and employers alike often call for learning and certification paths that recognize the balancing act of work, family and education. At Nicolet, for example, competency-based education appears to be the right path for students engaged in trades such as automotive technology, welding and culinary arts. It could spread to about 60 percent of the campus in time.

One returning student who benefited from Nicolet’s flexible approach to learning was Nancy Brekke-Jones of Rhinelander, who finished among the top 12 finalists in this year’s Wisconsin Governor’s Business Plan Contest.

Brekke-Jones, of Rhinelander, had come up with an idea for a “no-tie” Velcro strap that could replace shoelaces on any shoes, primarily to help children and adults who have trouble tying shoes. Her idea for a hook and loop system, now patented, was a result of 26 years of experience in the footwear industry. She realized she needed to learn how to turn that idea into a business, however, and went to Nicolet for help.

“I wasn’t sure where I was going to go for a business plan. At first, I really didn’t have a clue,” Brekke-Jones said.

She signed up for a class on entrepreneurism at Nicolet, started it within a week of enrolling, took advantage on online resources as well as guest speakers, and started down a path that led her to emerging from a field of 200 contestants in the 2018 statewide business plan contest.

Not only is her business, Replace-A-Lace, gaining traction, but she’s been invited to help teach other students at Nicolet.

“I think the entrepreneurial spirit is very much alive here,” Brekke-Jones said. “I was able to learn a great deal that helped me with my business.”

In parts of Wisconsin, as well as other states, workforce shortages threaten to hold back the economy. Even with efficiencies brought on by technology, there aren’t enough people in the talent pipeline to replace retiring workers or to supply growing companies in specific business sectors.

If competency-based education helps to remove some of the barriers that prevent people from getting the skills they need to advance their careers, perhaps more students can reach the workforce faster and better prepared to contribute to employers, their communities and beyond.