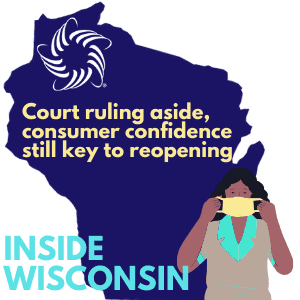 MADISON, Wis. – The virus that circled the globe in under six months is not going away simply because a divided Wisconsin Supreme Court struck down the state’s “safer at home” order. Everyone understands that dangerous medical reality … or should.

Likewise, the economic damage that has ensued since COVID-19 emerged in late fall is also not likely to go away soon, even if some parts of Wisconsin open the doors to businesses faster than others.

The reason for the second point is simple enough: Many people will stay away from bars, restaurants and large gatherings until they feel it’s safe to return.

The question before the Supreme Court was whether state Health Services Secretary Andrea Palm exceeded her authority in issuing the administration’s second emergency order, which was otherwise scheduled to expire May 26. The court’s 4-3 ruling that the order went too far was a legal one, not a referendum on whether COVID-19 had checked out from the planet.

Public-opinion polls, both state and national, suggest that most people have supported such orders, even if that enthusiasm withered as the economic malaise deepened. It leaves both policymakers and ordinary people alike asking how, or if, the risks of a renewed outbreak can be balanced against the possibility of an enduring depression.

Short of an effective vaccine or “herd immunity,” neither of which is on the near-term horizon, what steps might restore confidence to the point that consumers return? Here are some possibilities:

Businesses can reopen, but it doesn’t mean people will show up to buy things if they think it’s unsafe to do so. A reasonable measure of confidence will be required first.

Lockdowns in Wisconsin and elsewhere were never sustainable forever, or even for very long. They can be safely lifted, however, if restless consumers regain the confidence to believe it’s safe to venture out again.