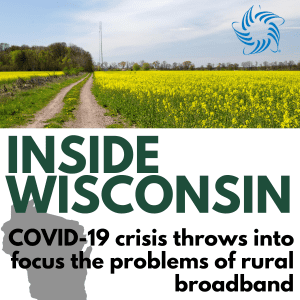 MADISON, Wis. – In Kenya, a Google-related company called Loon is working with an East African carrier to provide internet service through a fleet of high-altitude balloons. Hovering about 12 miles high in the stratosphere, the balloons will extend 4G connections across 31,000 square miles and represents the world’s first commercial use of the technology.

Asked why the tennis court-sized balloons are being tried in Kenya, the head of a tech research firm in Nairobi cited the coronavirus pandemic. “I think our current time of COVID-19 requires us to rethink infrastructure, essential services, movement of people, collection of data and connectivity,” Nendo founder Mark Kaigwa told the New York Times.

While it remains to be seen whether Loon is a permanent fixture in Kenya’s internet grid or a transition technology until more cell powers can be built and fiber optic lines laid, the sense of urgency surrounding rural broadband is not confined to isolated locations elsewhere.

It’s also a big deal in the United States, where COVID-19 has exposed challenges of unconnected communities when it comes to schools, health care and economic development.

As Congress and the White House debate how to further respond to COVID-19, improving “hard” infrastructure needs such as roads, bridges, railroads and more has attracted attention. The communications infrastructure represented by broadband should be no less vital at a time when the nation’s digital divide threatens to deepen.

Two nationwide coalitions weighed in this week with letters to congressional leadership, urging them to support bills that would help pay for expanding rural broadband while cutting red tape that sometimes stands in the way of improving service.

The Tech Councils of North America, representing about 35 state and regional groups representing more than 20,000 tech firms, and Connect Americans Now, which spoke for 46 groups ranging from farmers to schools to small businesses, independently outlined the connectivity problem in much rural America.

While about 95 percent of American homes have access to the internet, the percentage is much lower in rural America – and as low as 50 percent in parts of Wisconsin. About 42 million Americans lack internet access, which means there’s no working or schooling from home during a pandemic.

Connect Americans Now urged a “technology neutral” approach to federal broadband legislation, which means technologies ranging from television “white space” transmission, small-cell wireless technologies and – yes, giant balloons – could all be a part of the fix if satellite and fiber optic solutions aren’t available or cost too much. It also urged minimizing “administrative burdens” where possible.

The TECNA letter cited two bills, H.R. 7160 and H.R. 7022, introduced with bipartisan support. The first bill would remove regulatory hurdles that date to the days dial-up modems and open the door for more competition. The second bill would speed deployment of gigabit-tier networks through the Rural Digital Opportunity Fund. The Wisconsin Technology Council is a member of TECNA.

Both groups noted the COVID-19 crisis and how life in unconnected communities could get more difficult as the pandemic drags on.

Of course, the short-comes of rural broadband didn’t begin with COVID-19 nor will they end when the virus has passed from the scene. In states such as Wisconsin, the lack of competitive, high-speed connections means that some communities operate at a disadvantage when it comes to commerce, health care, education and more. That’s not good for the long-term economic health of the state.

High-altitude balloons may not be perched 12 miles above the Chequamegon National Forest tomorrow, but some of the bills under consideration could make it easier to serve rural broadband needs in creative ways. Too bad it took a pandemic to get us to that point.