InsideWis: Economic metrics chart Wisconsin progress, or lack of it, since 2000 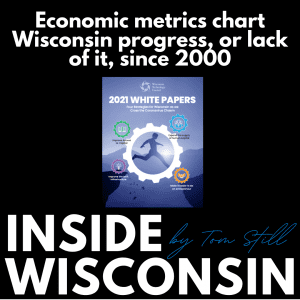 MADISON, Wis. – Some up, some down and some sideways.

That summarizes a look back at “Vision 2020: A Model Wisconsin Economy,” a report issued by the Wisconsin Technology Council in 2003 to chart the state’s progress in selected economic categories.

The report set goals for boosting economic output, educating more “knowledge workers” for 21st century jobs and attracting more investment capital. As 2021 unfolds, it’s time to draw some conclusions about how the state has performed over time – and what that means for a future temporarily sidetracked by COVID-19.

Exports told a similar story until late. The dollar value of Wisconsin exports was $10.8 billion in 2000, good for 19th among the states. It reached a high of about $23 billion but fell to $21.7 billion in 2019 and $20.5 billion in 2020, which dropped Wisconsin to 23rd among the states. A truce in the trade wars and full implementation of the U.S.-Mexico-Canada Trade Agreement, which includes Wisconsin’s two leading trade partners, may move the dial in years ahead.

If Wisconsin is stuck in neutral in those major categories, is it making progress – or falling short – in others?

Wisconsin’s venture capital traffic may have not slowed appreciably in 2020, despite the pandemic. A full count of deals and dollars won’t be available for a while, but it’s already clear the COVID-19 crash wasn’t as severe as some predicted. Wisconsin will never be California, Massachusetts, New York or Texas, as those four states account for 80% of all U.S. venture capital. However, Wisconsin should aspire to match Minnesota and Indiana, which have roughly the same population and more investments.

The growth in high-tech jobs has been significant, according to a mix of recent reports. Vision 2020 forecast a total of 310,000 “high-tech occupations,” and whether that goal was met depends on how jobs are counted. Total direct tech jobs in Wisconsin were 263,997 at the end of 2019; counting indirect jobs, the total was 336,442.

Vision 2020 also suggested goals for the growth of “knowledge workers,” who are essential to the growth of a tech-based economy. Here are goals set in 2003:

The state’s overall education rank is largely unchanged from the base year. Wisconsin is not an island, however, as other states recognized the need for a better educated workforce and took steps to improve.

What may be just as important is the “survival rate” over time of young companies. In other words, how many firms are left standing after one, three or five years or longer? By that measure, Wisconsin has performed better. In January 2020, the state Department of Revenue reported that Wisconsin ranked in the high teens among the states for net business creation.

Wisconsin’s R&D spending has increased, although not as much as projected because of declines in federal and state investment. Industry R&D spending has improved, however, and the state ranks about the same as it did (20th) in 2000.

In the years ahead, innovation will continue to drive virtually every sector of Wisconsin’s economy. The Vision 2020 report offers one measure of the road the state has traveled and helps to guide where the path should lead.

Still is president of the Wisconsin Technology Council. He can be reached at tstill@wisconsintecnologycouncil.com.