InsideWis: Even with new scientific paths, broad vaccine availability still a year or more away 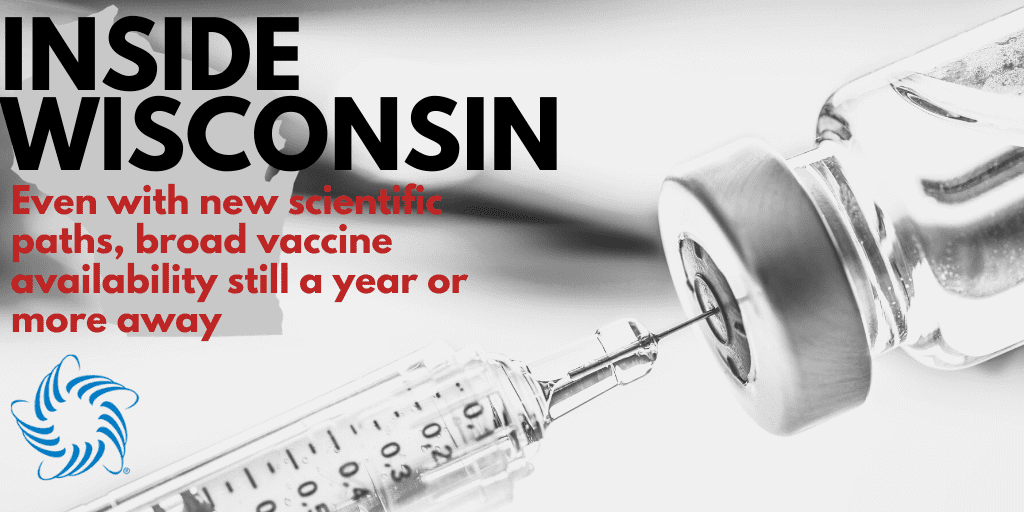 MADISON, Wis. – In the 1950s play “Waiting for Godot,” two characters talk among themselves and a few others while patiently anticipating the arrival of a friend named Godot, who never shows.

If that Samuel Beckett play was recast today for the COVID-19 pandemic, perhaps Didi and Gogo could be portrayed by public figures both national and local.

President Trump has ordered a Manhattan Project-style effort called “Operation Warp Speed” that aims to inoculate almost all Americans by late 2020 or early 2021 with a coronavirus vaccine. Closer to home, the reopening order for Dane County may not be fully implemented until a vaccine is available in quantities that could make a difference.

Is the “Godot” of a swiftly produced vaccine possible? With new development technologies, a boatload of money, clinical trials that work like clockwork, a simultaneous and financially risky manufacturing plan and a bit of luck, perhaps.

Otherwise, even inherently optimistic experts in Wisconsin think it could be spring 2021 before a safe and reasonably effective vaccine can be brought to market in the number of doses necessary to combat COVID-19. Even then, such a vaccine will be unlikely to provide lasting immunity on the first dose.

That’s the consensus of three interviews with Wisconsin scientists known nationally and beyond for their vaccine and immunization expertise.

“I would be surprised if we saw a vaccine that is both safe and effective until about this time next year,” said Dr. Jon Temte, an associate dean in the University of Wisconsin School of Medicine an Public Health and a former chairman of the U.S. Advisory Committee on Immunization Practices. “I would be thrilled if it was earlier. I would love to say we’ll have a good, functional vaccine in a matter of months. But that doesn’t happen very often… History is paved with vaccine (development) failures.”

Dr. James Conway, also at UW-Madison, is a leader over time in the American Academy of Pediatrics for immunization and infectious disease strategies. He is working with the federal Centers for Disease Control and the AAP on improving immunization practices in 12 African nations. His forecast is similar.

“I think there’s enough desperation that there will be some kind of vaccine approved by end of 2020 and some doses available spring 2021,” said Dr. Conway, who added the first doses will likely be administered through advanced clinical trials and probably won’t provide long-term immunity. “But it will give hope and lead to larger volumes of vaccine available in late 2021 that also provide short-term immunity.”

Richard Lesniewski is the president and chief executive officer for Madison Vaccines, a company engaged in developing a vaccine for a non-infectious disease, prostate cancer. Lesniewski worked in the past with a leading scientist at Moderna Therapeutics, the Boston-area company that generated some excitement with its early vaccine tests.

“I’m north of optimistic that, by the time we’re two years out, we’ll have one, two or more tried-and-true vaccines,” Lesniewski said. “I think we’re living in a good time in which we should assume scientific success. However, if anyone talks with great certainty about having a proven vaccine in the short term, I would be very skeptical.”

Vaccine development has advanced to the point where what once took decades can now be done in years.  Shorter time frames are possible, in part because so much money is being thrown at COVID-19 nationally and abroad and nearly 150 vaccine candidates are somewhere in the pipeline.

“The winner is already potentially out there,” Dr. Conway noted, although there’s no betting on which company or consortium might emerge on top.

“My analogy is much like a collegiate cross-country race,” Dr. Temte said. “They all line up, the race gets underway and they’re still grouped at the first quarter mile or so. Then, the pack begins to separate. The known champion is in the race, but that champion may not be the early leader.”

What gives Lesniewski hope is a revolution in vaccine development that relies on sequencing of the DNA of the COVID-19 virus (technically, SARS-CoV-2) that is used to produce an RNA that creates a protein that simulates the actual virus. Thus, the body’s immune reaction can be triggered.

“It’s still an experiment that must be validated by trials, don’t get me wrong,” Lesniewski said. “But the science is sound.”

Barriers cited by all three scientists included human safety, testing a representative sample of healthy people, not taking unwise shortcuts, determining how many doses are effective over time, being prepared to modify the vaccine if the current virus form mutates, and maintaining the ethical canons of not deliberately exposing people in clinical trials to the virus to determine if the vaccine worked. Then there are the hurdles of production, distribution and acceptance by a skeptical public.

“Godot” is likely out there. The question is how long society must wait.