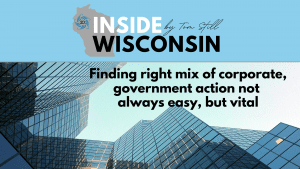 MADISON, Wis. – Delta Airlines will become the first major U.S. company to charge unvaccinated employees more for health insurance – about $200 per month more, to be precise – to stay on the company’s self-insured health plan.

Although new to the COVID-19 pandemic, insurance surcharges are not unprecedented in corporate America. Smoking cessation is a common example with life insurance plans and even some health policies, as many companies want to lower the heavy costs tied to smoking once people get seriously ill.

Delta said it costs about $50,000 for every unvaccinated employee who is hospitalized, so the premium “kicker” was added along with other COVID-19 requirements that fall short of a company vaccination mandate. For Delta and potentially other companies, it’s an alternative to requiring all workers to be jabbed at penalty of firing.

Whether it’s COVID-19, climate change, workforce education or intensely local issues such as filling potholes, private companies are stepping forward to address problems that aren’t easily solved by government requirements – or lack of action, in the other extreme.

Divided government at federal, state and local levels means it increasingly falls to businesses to innovate around big issues that touch their customers, employees and workplaces, as well as society overall.

The development of COVID-19 vaccines would not have happened without federal dollars and agency testing, but vaccine hesitancy won’t subside with government requirements and incentives alone. Bolder steps by private companies are more likely to move the dial because those firms don’t want to incur preventable costs and most workers don’t want to risk losing their jobs.

Such private initiatives are likely contributing to the rise in vaccination rates in the wake of the COVID-19 Delta variant surge.

Climate change is another example. While some politicians still deny that human activity is altering the world’s environment, many private companies are taking steps on their own within the framework of government incentives or regulations.

Coal-fired plants are being retired across the United States and very few, if any, new coal plants are on the horizon. Even the construction of natural gas plants for electricity generation may be peaking. Instead, alternatives such a solar and wind are on the rise. That’s not because energy company executives have suddenly become disciples of “green” activist Greta Thunberg, but because they want to pursue long-term strategies that can protect shareholders and bottom lines while reducing carbon emissions. It simply makes good business sense over time.

Land-use practices employed by private landowners can be less expensive and more efficient than those required by government. In the state of Oregon, 80% of the acres burned over the past decade or so have been on federal land, according to data from Oregon’s Department of Forestry. Fires on private timberlands can be more quickly suppressed because firefighters have more access through roads, and those lands may not accumulate tons of dead timber on the forest floors.

Companies increasingly institute their own worker training programs to pick up where high schools, technical colleges and universities end. It’s not because those company leaders don’t value the general education services schools provide, but they know it takes more to create a skilled workforce. Companies are also among the biggest funders of programs in traditional classrooms to reskill workers.

Corporate executives don’t want to see the nation return to the economic chaos that characterized the first COVID waves. Not every company can have workers who are “remote.” Many companies need workers back on the factory floor or behind the counter and may choose to require vaccinations, regular testing or other options sooner than later. While that is a potential problem for companies already hard-pressed to find workers, many are willing to take the chance.

As many Americans lose faith in the ability of government to act, or act quickly, they are expecting companies to do more to restore their confidence. Research suggests that when companies do a good thing, their products are viewed as safer and consumers will lean in. Not every company works for the larger good, of course, and some are even bad actors. That’s why government rules exist – to catch and sanction the worst players.

If any good comes out of the COVID-19 pandemic, perhaps it will be broader recognition that other major problems can be resolved through a mix of public and private innovation.