InsideWis: Longer-term economic recovery may depend on how science can help 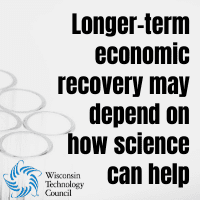 MADISON, Wis. – Whether it’s called a modern “Manhattan Project,” or a medical moon shot, the concept of long-term economic recovery rests on how confident people are they won’t risk serious illness by venturing forth in public again.

Wisconsin stands to be a significant part of such an undertaking, whatever it’s called.

The shorter-term debate is well under way over the gradual lifting of COVID-19 emergency rules, such as the now-extended “safer-at-home” order in Wisconsin. At least a dozen states, including regional coalitions on the East and West coasts, are exploring next steps as they seek to balance responses to the virus with calls for reopening the economy, at least, in part.

Wisconsin’s ability to shape longer-term responses will come from private and public resources, which range from companies engaged in production of diagnostics, therapeutics and vaccines to research institutions taking part in projects that may be national or even international in scope. Here are some examples:

Shortening vaccine development, which normally has a multi-year cycle. Wisconsin has expertise in this area through its research universities and private companies such as Madison’s FluGen. Co-founders Yoshihiro Kawaoka and Gabriele Neumann are known around the world for their past anti-viral work, which is why FluGen was approached by an India-based firm, Bharat Biotech, which has developed 16 vaccines in the past, to take part in a larger vaccine development project that also involves the UW-Madison.

To be called “CoroFlu,” the vaccine in development will be built on the molecular platform of FluGen’s M2SR, which may be able to produce immune responses to COVID-19. Human clinical trials could begin this fall.

CoroFlu, like M2SR, will be designed to be delivered intranasally. That mimics the natural route of infection by coronavirus and influenza and activates several modes of the immune system. Intranasal delivery is more effective at inducing multiple types of immune responses than the intramuscular shots that deliver most flu vaccines, according to FluGen scientists.

Developing or repurposing therapeutic applications. A current example is research into whether injections of plasma from people who recovered from COVID-19 can help shorten the duration or severity of the illness in new patients. The UW-Madison School of Medicine and Public Health and UW Health are part of a nationwide effort to study whether the plasma of recovered patients can help speed the recovery of others. The UW announced its first plasma transfusion this month. The Medical College of Wisconsin, Froedtert Hospital and Versiti Blood Center are also deeply involved.

Those medical researchers are working to collect blood from people who have recovered from COVID-19. The goal is to use plasma rich in antibodies to treat hospitalized patients struggling to fight of the new coronavirus.

Providing the reagents and molecular “toolkits” needed by test producers and researchers everywhere. Fitchburg-based Promega is a world leader in that category and emblematic of a larger cluster of such companies in Wisconsin. Promega is a major producer of reagents, which are substances or compounds added to a system to cause a chemical reaction, supplying 16 molecular diagnostics manufacturers around the world.

The company also supplies reagents for laboratory developed tests run by hospitals and other laboratories, and it has cranked out enough supply for tens of millions of COVID-19 tests. Diagnostic manufacturing in its Madison-area facilities have been running pretty much around the clock for weeks.

Beyond these science-based efforts and more are much deeper structural and even political issues.

Today the threat is COVID-19; tomorrow it may be a different pathogen, viral or bacterial, that threatens humans everywhere. Resistance to antibiotics is already a looming problem, for example. Will we be prepared for what comes next? Will the right distribution systems and stockpiles remain in place, or will they fade into memory? Will litigation over COVID-19 claims become the new spectator sport, making it even harder for the economy to recover?

The debate over short-term economic answers is vital, but so is the response to what comes next.