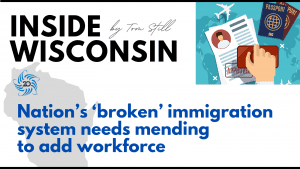 MADISON, Wis. – There is no single answer for why the United States, Wisconsin included, is experiencing a shortage of workers in most industry sectors.

“Baby Boomers” calling it quits; fewer young people entering the workforce to replace them; troubles finding childcare; COVID fatigue; and $300 per week in extra jobless benefits from the federal government – “competing with the couch” – are among commonly cited problems.

Here’s another: An immigration law deadlock that prevents many people from jumping at the chance to work.

Whether it’s on the farm, on construction sites or in high-tech firms, the need for workers is intense. People on the front lines in those sectors say a reformed immigration policy would help – if only political forces vested in the “brokenness” of the status quo would stop blocking potential compromises.

“Why hasn’t this problem been solved?” asked Reid Ribble, a former Republican congressman from Wisconsin and current chief executive officer of the National Roofing Contractors Association. “The reason the problem has not been solved is because there’s a political advantage to each political party to not solve it.”

As one of four panelists in a forum produced by WisBusiness.com and the Wisconsin Technology Council, Ribble decried “brokenness” in the immigration system. He pointed to workers who have lived in the United States for more than 20 years under “temporary protected status” as evidence the system doesn’t work.

Ribble noted some left-leaning unions oppose expanding immigration because they believe it “steals” jobs from native-born Americans and depresses wages. One study after another has debunked those theories, he said. Some right-leaning groups claim immigrants cause more crime and add to social service burdens, which is also not borne out statistically, the speakers noted.

No one wants a free-for-all, as the status quo on the southern border demonstrates. But observers such as the June 15 panelists urged following a process that encourages legal immigration versus flying under the radar illegally.

Ankit Agarwal, president and CEO of Imbed Biosciences in Madison, said it is difficult to hire foreign-born graduates from Wisconsin universities. Because the total of H-1B specialty employment visas is capped at 65,000 per year, he said, most of the 200,000 or more annual applicants are unable to stay and work in the United States after graduation.

“On one hand we talk about growth in businesses, growth in startups, hiring more highly educated workforce – but on the other hand, this 65,000 (cap) has been around for the last 20 years,” he said. “How can we grow the workforce and grow the education system … but not increase the H-1B visas, which is the only way for them to become part of the American workforce?”

Kelly Fortier, an immigration attorney with the Michael Best law firm, called expansion of the H-1B category “a really easy solution” to address shortages in industries that require highly skilled workers. She said the cap was temporarily increased to 200,000 during the “dot-com boom” of the late 1990s and early 2000s, but was then reduced to its current level.

The problems are not confined to the tech industry. Jay Heeg of Heeg Brothers Dairy in Colby, in north-central Wisconsin, said the dairy industry would be in major trouble if not for foreign-born workers. About half of all dairy workers in Wisconsin were born elsewhere, usually in Central America.

Heeg Brothers milks about 1,100 cows, crops 3,000 acres and raises about 1,000 heifers, all with a work force of fewer than two-dozen people. Even with automation, Heeg said, it’s a labor-intensive business that operates 365 days a year. Foreign-born workers don’t replace native-born Americans at his family-owned dairy, he said, because the supply of workers with the skills and aptitude to do the work is thin whether they’re from Colby or Costa Rica.

Panelists agreed the country will be unable to compete effectively unless steps are taken to incorporate more immigrants into the work force.

“Congress needs to address this, if for no other reason than to put the demagoguery aside, so we can get away from whatever racist elements are there,” Ribble said. “But they also need to put it aside because demographically we’re headlong into a crisis … birth rates have been declining in this country for 20 years; we’re now below replacement level.”

The Biden administration is preparing an immigration package that faces an uncertain destiny in Congress, not just because some Republicans oppose it but some Democrats, as well. “Brokenness” is not a long-term answer; rational bipartisan debate of the issue could fix that.