InsideWis: Psilocybin research makes for strange political bedfellows – but promise is there 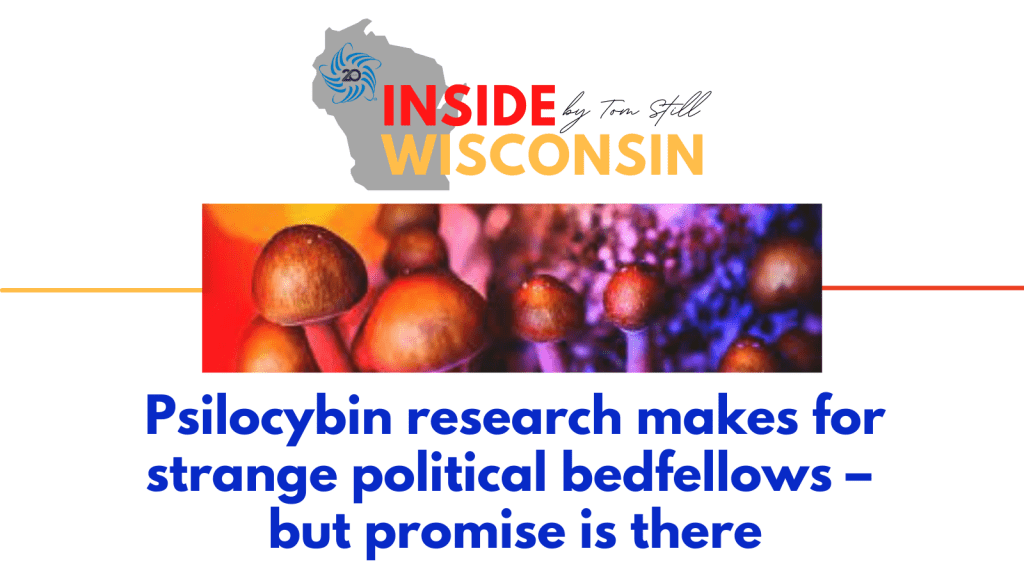 FITCHBURG, Wis. – Former Texas Gov. Rick Perry spent 14 years in that chair before twice running for president and later becoming President Trump’s Department of Energy secretary. Never a fan of legalizing recreational drugs, Perry came out of semi-retirement this spring to back a Texas Democrat in her bid to require a state clinical study of using psilocybin – found in “magic mushrooms” – to help veterans with mental health problems.

The bill passed the Texas Legislature, thanks in part to Perry, meaning Texas joined Oregon, Connecticut, New Jersey, Maine and California in taking a harder look at using psilocybin and other psychedelic drugs to treat depression, Post Traumatic Stress Syndrome and even conditions such as Parkinson’s disease.

“Ten years ago, if you’d made a bet that Rick Perry’s name and ‘psychedelics’ would be used in the same sentence, you could have won a lot of money,” he told a largely Wisconsin crowd meeting Aug. 3 on the Promega Corp. campus in Fitchburg.

Perry quickly added he had seen enough examples of how the drug has worked – especially with U.S. military veterans suffering from PTSD who traveled to Mexico for treatment – that he became a convert to supporting more study and possible use in the United States.

Why did Perry show up on the campus of Wisconsin’s signature biotechnology company? To talk about research on psilocybin being done by companies such as the Usona Institute, which has ties to Promega and 25-plus employees of its own. The institute will open a 93,000-square-foot facility on that campus within three years.

“This isn’t a conservative or Republican issue. It’s a right or wrong issue,” said Perry, who finds himself in the company of congressional Democrats such as Rep. Alexandria Ocasio-Cortez in calling for more government-funded research. In fact, a bill calling on the National Institutes of Health to fund such studies may be moving through Congress.

Proponents say even single doses of psychedelic drugs such as psilocybin, the hallucinogenic found in “magic mushrooms,” can provide long-term benefits for some mental health patients. The groundbreaking of the $60-million Usona facility came as the company embarks on a Phase 2 study of psilocybin to treat depression. That study will take place at UW-Madison, Johns Hopkins University, Yale University and other sites. A first-in-human study by Usona is planned for 2022.

Also at the Fitchburg ceremony was Dr. Lynnette Averill, a clinical research psychologist at Baylor College of Medicine in Texas. She studied PTSD at Yale and believes psychedelic-assisted treatments are an emerging frontier in psychology, especially for those who suffer from PTSD.

Averill noted that some people who have undergone psilocybin treatment report having “incredibly meaningful, sometimes spiritual, mystical sorts of experiences” that help to counter feelings of guilt and shame – and put them back on the road to a normal life.

For some veterans, coping with mental health issues is a matter of life and death. A recent federal report noted that 17 veterans commit suicide each day in the United States, out of a total of 132 daily deaths in that category.

Scientists in recent years have studied psilocybin, MDMA, LSD, ketamine and other psychedelic drugs for various mental health problems. Most psychedelics are Schedule 1 and have been banned since 1973. Ketamine is used clinically for depression in many places, including at UW Health. The U.S. Food and Drug Administration has given “breakthrough therapy” designation to psilocybin for depression and MDMA for PTSD, meaning there is support for potential approval, pending study results.

There are skeptics, of course, which is not unexpected given concerns about medical research being used as a stalking horse for legalization of recreational drugs. Two researchers from the University of Pennsylvania and Columbia University urged caution Aug. 2 in the Journal of the American Medical Association online.

“The promise of therapeutic benefit from psychedelics is appealing, but overly rapid legalization and commercialization may short-circuit prudent legal reforms,” the JAMA article concluded.

Usona’s pursuit of FDA approval for psilocybin is likely to take a while, but it’s also a safer and more credible path. It will also serve to persuade possible investors that it’s a chance worth taking. Most important: A well-constructed study may move psilocybin out of the shadows and into the light of day for those who suffer from mental health conditions.