InsideWis: Removing ‘weirdness’ from being a female early stage investor 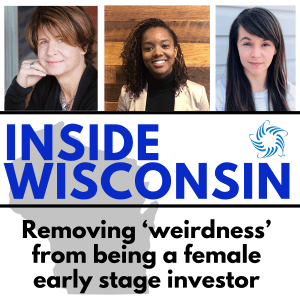 MADISON, Wis. – Richelle Martin has a simple goal in mind for how some people may view women like herself who are venture and angel capital investors: “I want it to not be weird anymore.”

Not that it’s actually “weird” for women to be early stage investors, of course, but Martin’s point is that she hopes it reaches a stage that it’s no longer considered odd or unusual when a woman investor walks into a room, virtual or otherwise, to hash out a deal.

Martin, managing director of The Winnow Fund, joined two other investors from the state’s angel and venture capital community Dec. 2 for a conversation about the rise of women in early stage investing. A big takeaway from the Wisconsin Technology Council’s annual WOMEN reception was that, slowly but surely, women are becoming more active in Wisconsin’s investment scene and some are moving into positions of leadership.

About 85 people signed up to hear Martin, whose young fund is part of the larger Badger Fund of Funds; Andrea Dlugos, a co-manager for Wisconsin Investment Partners; and Dana Guthrie, recently named managing partner for Gateway Capital Partners, the latest addition to the Badger Fund of Funds.

Martin’s fund is focusing on innovation emerging from Wisconsin’s public and private campuses, especially those campuses that may be overlooked by other investors. For example, an agreement between Winnow Fund and Concordia University was announced Dec. 3.

Since formally entering the venture capital scene about two and a half years ago, Martin told the webinar audience, she has noticed more women investors stepping forward and others who were veteran investors offering tips and advice.

“Don’t be afraid,” Martin told would-be investors. “Don’t buy into imposter syndrome. We can do it.”

Someone who has been “doing it” for years is Dlugos, one of the managers of Madison-based WIP. It’s one of the state’s oldest angel networks, currently with 82 active investors, about 20 of whom are women. The network has been involved in about 300 deals over two decades, with about 45 still active and a handful of new investments taking place each year. Seven WIP deals have “exited” over time, a term that describes an acquisition or other event that made money for founders and investors alike.

Dlugos added that a potential source of women investors could be women who are philanthropists, those who carefully donate to causes and organizations after checking out how viable those targets are. “If they choose to look at being investors … they could be very confident and good at it,” she said.

Numbers help to tell the story: Thirteen Wisconsin funds have managers or directors who are women; five Wisconsin funds over time have been founded by women; funds managed by women are found across the state; and women are involved in leadership positions at more than 20 Wisconsin funds, networks, corporate venture funds or other early stage investment groups.

Computer and energy engineer graduate Guthrie is among the newest additions, having just left a Fortune 500 company where she worked while also establishing Milwaukee’s Alchemy Angels. Her Gateway Capital Partners fund is still raising money, but she will work with young companies in the region after that task is done.

Like Martin, Guthrie noted that other women investors have served as a sounding board. “These people are willing to pour back into the communities they came up in,” she said. “We’re going to have the same responsibility on our shoulders” if younger women run successful funds.