InsideWis: Tech world watches as Apple and Epic Games slug it out in court 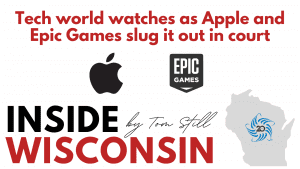 First released in 2017, one of the enduringly popular versions of the online video game Fortnite is called “Battle Royale.” That’s also a fitting name for the high-stakes federal court trial pitting Fortnite developer Epic Games against Apple, an icon of the mobile economy.

The trial, which is expected to run another two weeks in an Oakland, Calif., courtroom, has implications that could extend far beyond Epic Games’ allegations about Apple’s anti-trust behaviors into the rest of the gaming and mobile worlds – including Wisconsin.

Epic Games (no relation to Epic Systems in Verona) is a $29-billion company that sued Apple, claiming it runs its App Store as an illegal monopoly. That is because Apple only allows in-app purchases on iPhones to be processed by Apple’s own payment system on its more than 1 billion iPhones around the world – typically adding a 30% commission on every purchase.

Apple is a $2 trillion company that counters the fee is necessary to safeguard the privacy and safety of all apps across all Apple devices and platforms and doesn’t shut out competitors.

While the trial is not “digital David versus Goliath” – Epic Games itself is enormously successful – the outcome could affect much smaller app developers who have asserted at times the “Apple Tax” falls unfairly on them.

The case is also being followed closely in Washington, D.C., where Congress held a hearing last month on the possible monopoly power of huge app stores, and in the European Union, where regulators have filed charges against Apple for allegedly breaking EU antitrust laws related to distribution of music streaming apps. That stemmed from a complaint against Apple made by Sweden-based Spotify.

Even though Epic Games has the resources to go toe-to-toe with Apple, winning an antitrust case is no cinch under U.S. law that dates back more than a century.

In a pretrial decision, Judge Yvonne Gonzalez Rogers reportedly appeared skeptical that Apple is violating the Sherman Antitrust Act of 1890 by acting like an illegal monopoly, but nonetheless ruled there was good reason to let the trial commerce. Proving Apple has engaged in monopolistic practices alone is not enough – it must be shown the company abuses its power to hurt competitors and tilt the full market.

Also, beating Apple in a courtroom is no easy task, as demonstrated by the Wisconsin Alumni Research Foundation’s long slog in the 2010s over a patent infringement case involving a UW-Madison professor. Deep pockets matter.

Still, the Epic Games versus Apple trial is the most high-profile antitrust challenge in the technology world in decades, involving a long list of potential witnesses for both companies and well as “expert” witnesses. One such witness on the list is Nancy Mathiowetz, a principal consultant with William E. Wecker Associates and professor emerita at the UW-Milwaukee. She is an expert on survey methodology.

The outcome will likely be watched closely by gaming companies and app developers everywhere, including Wisconsin, where companies such as Raven Software, PerBlue, Filament Games and PUGB (PlayerUnknown’s Battleground) employ hundreds of people collectively. Epic Games is a North Carolina company, further demonstrating the $200-billion video game industry is not entirely centered in California’s Silicon Valley.

With the witness list include tech celebrities such as Apple chief executive officer Tim Cook, Epic Games CEO Tim Sweeney, Microsoft Xbox CEO Lori Wright and Adrian Ong, senior vice president for operations at Match Group, there is plenty of star power waiting to take the stand. The “Scopes Monkey Trial” of the digital age? Perhaps not, but still an evolutionary case.