InsideWis: The clock is ‘Tiking’ on larger data privacy issue 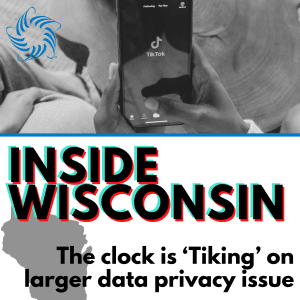 MADISON, Wis. – I don’t get the fascination with TikTok, the video-sharing platform that is essentially a worldwide talent show for obscure skills, but that’s totally OK. Millions of people do enjoy it and, for many of them, it has been a source of entertainment and relief during the COVID-19 pandemic.

At the same time, I understand concerns that TikTok may help the Chinese government to glean information from its users on a massive basis, to the point the U.S, government worries TikTok “allows China to track the locations of federal employees and contractors, build dossiers of personal information for blackmail, and conduct corporate espionage.”

What is less clear is whether the efforts to block TikTok and some other popular sites, such as WeChat, are based entirely on legitimate cybersecurity concerns or partly driven by political factors that could wind up hurting the logical evolution of the tech economy and the internet.

President Trump signed an executive order last month to block transactions with ByteDance, TikTok’s parent company, and Tencent, which owns the popular messaging service WeChat. He signed a second order requiring ByteDance to sell or spin off its American TikTok business within 90 days, plus destroy all its copies of TikTok data attached to U.S. users. As companies including Microsoft, Walmart, and Oracle have expressed interest in buying the app, TikTok is suing the feds for violating due process.

It’s not just the American government, by the way. The government in India has banned TikTok and more than a hundred other Chinese apps, a sign of rising tensions between the two nations.

The question is whether TikTok and WeChat are inherently more dangerous to the security of the United States or any other country than what home-grown firms do to collect personal information every day.

Whether its Alexa eavesdropping on conversations or Facebook turning over mounds of data to Cambridge Analytics a few years back, the rise of technology in our everyday lives has created multiple opportunities for personal data to be collected, whether it is ever used by others or not.

Before the digital pitchforks are hoisted too high, however, it is worth considering whether the movement to ban specific products, apps or sites is an impediment to digital trade when the better solution might be standards that hold all such products and services to the same standards.

The United States was a leader in data privacy laws decades ago, but not enough is being done at the federal level today to prevent personal information from being misused. The European Union’s General Data Protection Regulation aims to harmonize privacy laws across the EU, but critics say it continues practices that have long stifled innovation in Europe. China’s data privacy protocol is even more far-reaching and, some argue, even dangerous, given fears of cyber-snooping on U.S. tech companies.

It is why members of Congress have been urged to adopt federal standards that would pre-empt 51 different state privacy laws, an outcome that would make a mess of interstate commerce while confusing consumers.

Writing recently in the Harvard Business Review, two researchers agreed cyber-attacks and snooping are major problems. However, they questioned whether focusing on specific apps is the way to go.

“If data collection by a company with overseas connections comprises a threat, there are threats all around,” wrote Keman Huang and Stuart Madwick. “The data that TikTok collects pales in comparison to, say, what most American tech companies (as well as banks, credit agencies, and hotels) collect, both visibly and less so… If the Chinese government wanted the kind of information TikTok could collect, it could be obtained in many other ways.

It would be better for the free flow of information, innovation and ideas to create digital privacy rules for all to follow, rather than setting up what are essentially “trade barriers” to the continued evolution of the internet and eCommerce.

The technology revolution that began with the birth of the internet is maturing in ways that were hard to imagine. Just as the first three Industrial Revolutions (machines, power and early computers) led to unintended consequences in society and democracy, so is the Fourth Industrial Revolution changing the world through mobile technologies, machine learning and open source software.

It’s scary, to be sure. But the answer likely doesn’t lie in banning specific sites or apps for what may be political reasons. It will be better to set reasonable rules for everyone to follow.