InsideWis: The link between education, economy, is more evident than ever 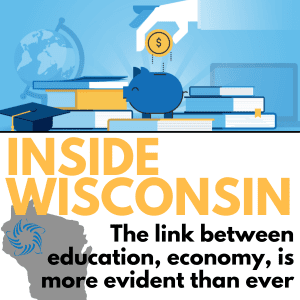 MADISON, Wis. – Many U.S. policymakers seem concerned about reopening bars, restaurants and health clubs closed during the COVID-19 pandemic. They should be at least as worried about restarting America’s education engine, which will best serve the economy – and young people – over time.

The differences between how the United States has reacted to the spread of coronavirus and how other countries have managed the disease have been stark at times, which isn’t all that surprising given the diversity of cultures, political systems and leaders.

What is emerging in Europe right now, however, is a clear lesson that should not be lost on American public health officials and elected leaders: Children, parents and the economy, both short and long term, benefit from live instruction in schools.

Even though there have been serious virus surges elsewhere in their societies, authorities in France, Britain, Spain, Germany, Italy appear to be virtually unanimous on the need to put children back in classrooms. They worry about learning gaps that grew wider during lockdowns earlier this year, especially among children from poor families, as well as parents who would be better off in their respective jobs and contributing to the economy than serving as amateur teachers.

It’s not that authorities in Europe – or elsewhere around the world — are crowding kids into classrooms as if it’s business as usual. The Associated Press reports that precautions are being taken that range from mask rules, hiring more teachers for smaller class sizes, physical changes in school buildings, hand-washing stations, one-way corridors, staggered starts and lunch times.

The consensus seems to cross all political lines, as well, with leaders in Europe’s left, right and center parties agreeing the children are better off in school.

In a rare joint statement reported by Reuters, the top health advisers to the governments of England, Scotland, Wales and Northern Ireland said they believe getting children back to school is a national priority for the United Kingdom.

“Very few, if any, children or teenagers will come to long-term harm from COVID-19 due solely to attending school,” the health ministers said in late August. “The percentage of symptomatic cases requiring hospitalization is estimated to be 0.1% for children aged 0-9 and 0.3% among those aged 10-19, compared to a hospitalization rate of over 4% in the UK for the general population… This has to be set against a certainty of long-term harm to many children and young people from not attending school.”

Closer to home, the American Academy of Pediatrics has concluded the harm to children from not having in-person education is greater than the risk posed by COVID-19. Poor children may be missing meals, child abuse instances may have gone underground, special needs students aren’t getting as much help, and further disruption in learning will have lasting effects on a whole cohort of students.

Governance of public schools is largely a matter of local control in the United States, so some districts in Wisconsin and elsewhere are using guidance from the Centers for Disease Control and state departments to adjust and reopen. They are refining how online education (not a panacea) will be delivered, rethinking transportation strategies to and from school, adjusting space needs, considering school “shifts” and more.

So why are some public health authorities making it so difficult for schools to reopen? In some cases, it’s over worries that teachers, staff and the community may be exposed. That extends to higher education and the recent example of some Dane County officials questioning the decision to reopen UW-Madison, where safety guidelines include massive testing protocols and much more.

UW-Madison Chancellor Becky Blank, in a blog statement published Wednesday, detailed the steps being taken on campus to allow a “hybrid” reopening – some live classes, some online – and defended the plan as best for students.

“Having students on campus and providing in-person instruction, where feasible, provides a better set of educational opportunities for students lacking suitable technology or spaces to effectively study at home,” Blank wrote.

The pandemic has already caused short-term economic stress on society. Failing to responsibly reopen schools will only prolong the harm and leave the United States less able to compete in a post-COVID world.