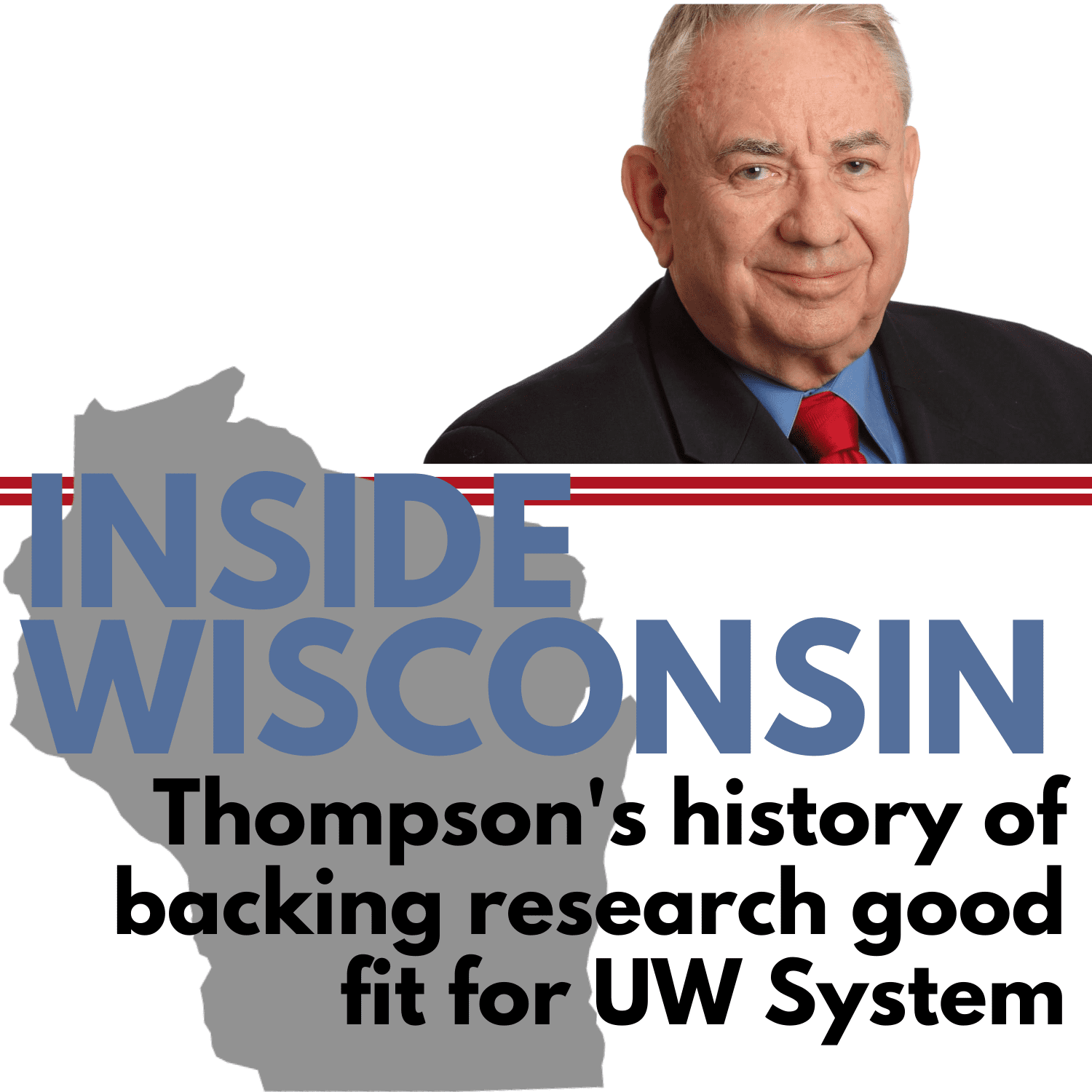 MADISON, Wis. – He may be in the seat for only a year or so, but former Gov. Tommy Thompson brings a solid record of supporting academic research to the job of interim president of the University of Wisconsin System.

The match of experience and need is timely, given the challenges facing the university system due to the COVID-19 epidemic, the reality of budget constraints and skepticism among some policymakers about the value of academic research and development.

Thompson was named interim president of the UW System June 19 by the Board of Regents, which sought to bring some order to things after a search to replace retiring President Ray Cross ended poorly. Rather than rush into another search for a full-time president, a united board tapped UW-Madison graduate Thompson, who has worn many hats over his career – lawyer, state legislator, governor, federal Health and Human Services secretary and business executive.

He will take office at a time when much of the research core in the UW System is strong – in fact, parts are stronger than ever. However, that strength will be tested by the uncertainty brought on by coronavirus, public funding and even larger trends affecting higher education across the United States.

As governor from 1987 until leaving office in 2001 to lead the federal health agency, Thompson supported basic and applied research in the UW System in prominent ways. He backed the multi-million-dollar “BioStar” initiative that led to the construction of key research and instructional buildings on the UW-Madison campus. He supported faculty hiring initiatives that attracted professors who brought in many times their salary “weight” in research contracts. While not a scientist, he understood the importance of biotechnology to modern medicine and the rise of genetic research during the race to map the human genome.

Perhaps most controversial at the time, Thompson supported human embryonic stem cell research in its earliest days on the UW-Madison campus. He carried that support into the Bush administration and helped shaped federal rules that remain largely in place today, even if the science itself has evolved to include mostly reverse engineered stem cells versus embryonic.

He steps into the interim president’s job with a changed R&D landscape from when he last dealt with the UW System as governor.

The UW-Madison remains one of the nation’s leading research institutions, with nearly $1.21 billion in annual expenditures for research across all fields, about half of which come from federal awards. According to National Science Foundation figures released in late 2019, UW–Madison’s federal research spending grew by 1.3 percent compared to the previous fiscal year.

Others have grown faster, however. The Madison campus peaked out at No. 2 nationally not so many years ago and routinely showed up in the top five. It ranked 8th in the latest survey, which means more work must be done to attract not only federal dollars, but private research.

The UW-Milwaukee was barely on the radar screen for research spending when Thompson left the governor’s office, but he backed efforts by Milwaukee chancellors at the time to establish an R&D footprint tied to industry in the region. Today, UW-Milwaukee is one of 130 institutions in the country (out of 4,338 universities) to attain the highest rating from the Carnegie Classification of Institutions of Higher Education.

The prestigious “R1” rating includes many Ivy League and public flagship institutions, such as the UW-Madison.

The biggest change may have taken place with the rest of the UW System, where undergraduate research has taken off on many four-year campuses. The Wisconsin System Technology Foundation, or WiSys, has contributed to that success.

A report released June 17 by the research arm of the George W. Bush President Center examined research data from all universities and colleges – metrics such as patents, disclosures and more – and determined that WiSys was No. 2 nationally in the subcategory of “Smaller Universities” for overall innovation impact.

That put the UW campuses collectively represented by WiSys in a class with Brigham Young, Northern Illinois, Duquesne and Creighton.

Even an interim president with Thompson’s background can only accomplish so much. But if the coming year or so produces deeper federal research in-roads, more private sector opportunities and a productive state budget debate, Thompson can chalk up his short-term gig as a career-capper.