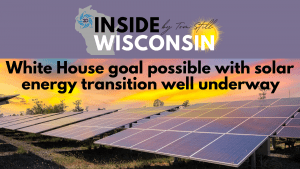 WISCONSIN RAPIDS, Wis. – Within 1,600 acres of land in the Wood County town of Saratoga, a transformation is under way that will eventually power up to 40,000 homes with electricity spawned by the sun. Where pine trees and pastures once reigned, rows of solar panels, racking, cables, inverters, transformers and a substation will soon occupy most of the land.

It’s an example of why the Biden administration goal of generating nearly half of the nation’s electricity from the sun by 2050 isn’t as far-fetched as it might seem.

The town of Saratoga project is one of 12 on the books for Alliant Energy alone, which looks to generate 150 megawatts of power seven miles south of Wisconsin Rapids and nearly eight times that amount through all its solar farms by 2023.

The biggest utility-scale project in the state right now stands to be the Koshkonong Solar Center, a 300-megawatt farm that could power about 80,000 homes with the kind of renewable energy advocates believe is key to dramatic reductions in greenhouse gases.

In some places, such as the Wood County town of Saratoga, those kinds of projects are largely welcomed by local officials, landowners and citizens who think the tradeoffs are worth it. In other places, such as the Dane County village of Cambridge near the proposed Koshkonong solar farm, the reception is mixed.

“Not in my backyard” opposition is just one factor that could hold back solar energy’s growth in Wisconsin and nationwide. Others include federal and state tax policies, the sourcing of solar panels now primarily manufactured in China, the staggered “retirement” of coal-burning power plants, the need for better storage technology, competition from natural gas, and competition from other renewable sources such as wind.

Steep … but not insurmountable, given what most scientists believe is a climate change crisis triggered by modern human activities.

To stave off the worst effects of climate change, such as rising sea levels, floods, droughts and fires, most experts believe the answer is to quickly curb release of carbon dioxide into the atmosphere. Megatons of carbon trapped in coal and oil over eons have been released largely inside of two centuries, which has led to warming and other changes.

Outside of sudden changes in public attitudes toward nuclear fission (zero emissions but waste disposal hurdles with old-style plants), nuclear fusion (no longer a pipe dream but still decades away) and the advent of hydrogen energy (which some believe may even harm the environment), tapping the power of the sun is a leading replacement candidate for coal.

The cost of providing solar energy has dropped over time and may decline more, especially if a stronger domestic supply chain is developed, incentives remain in place and the market continues to validate the option. It didn’t take a presidential order for developers and utilities across the nation to read the handwriting on the coal plant walls.

Some local concerns are tied to land use, especially if it involves prime farmland. Farmers don’t tend to sell their best land; they tend to part with marginally producing acres. Solar farms aren’t always built on farmland of any kind, but sometimes in sparsely wooded areas that don’t have much commercial value.

Once a solar farm reaches the end of its life span and the panels are removed, the land is still there. In fact, it might be even more fertile because it wasn’t repeatedly tilled and planted. In Wood County, for example, some of the land surrounding the solar farm will become pollinator habitat.

Perhaps the biggest hurdle facing the solar transition is what the rest of the world does. If the United States goes half-solar by 2050, does it really matter if China keeps building coal plants? The borders of the atmosphere don’t stop at California and New York.

Solar energy is already a growing part of the mix and will continue to expand. Whether a huge transition happens soon enough to make a difference is still at question.