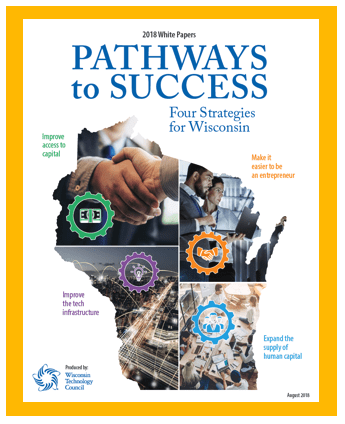 MADISON, Wis. – When the venture capital arm of American Family Insurance launched in 2013, AmFam Ventures was ahead of the curve in terms of corporate investing in that early stage asset class.

Seven exits and more than 25 portfolio investments later, AmFam Ventures is one of the nation’s leading corporate investors in financial technology and “insure-tech” fields. It has solid in-state company in those business sectors with the likes of CFMG Ventures at CUNA Mutual and Northwestern Mutual Future Ventures.

Other companies in Wisconsin with in-house investment arms or related interests in startups include Kimberly-Clark, Logistics Health, ABC Supply, Aurora Advocate and Direct Supply. That list could grow if other companies band together to join the venture capital trend.

A mechanism for those major companies to do so is called a “corporate fund-of-funds,” much like what was created in 2008 in Michigan and more recently in Cincinnati, Ohio. Michigan’s Renaissance Fund was initially funded by Ford, La-Z-Boy, Whirlpool and later added dozens more organizations. Cincinnati’s Cintrifuse launched with investments by Proctor & Gamble, Kroger and Western & Southern and has grown as well.

What is a corporate fund-of-funds? Quite simply, it’s a vehicle for pooling capital and investing in emerging firms, either directly or through other professional investors.

Such investments can target products or research related to core businesses of the participating companies. They can also invest in startups and scale-ups not related to the mission of the larger companies, but tied to the larger economy in that state, region and beyond.

Corporate fund-of-funds can also attract money from elsewhere, often in the form of co-investments by traditional, stand-alone venture capital firms that tend to congregate on the East and West coasts.

That’s pretty much what happened in Michigan, which went from a venture capital also-ran to a leader over the past 10 years in terms of dollars invested, number of deals and out-of-state investment.

Chris Rizik, the managing director of the Renaissance Fund, described the fund’s structure, investment experience and results in early 2017 at the invitation of the Wisconsin Technology Council. He described Wisconsin as “poised” for such a fund. The Tech Council most recently cited the benefits of such a fund with the release of its 2018 white-papers report, “Pathways to Success.”

One solution for improving those numbers at the earliest stage is the Badger Fund of Funds, which will focus more on the youngest companies. That fund is already in place, with five regional funds investing or forming. A corporate fund-of-funds would aim higher in the asset class and likely build on existing investments in young companies.

“Capital availability is one of the major constraints facing entrepreneurs in our state,” said John Neis, managing director of Venture Investors LLC in Madison. “When we talk with investors in other places about investments here, one of the first thing they ask is whether the local investors are in the deal. If we in Wisconsin who stand to benefit most, and who know the entrepreneurs and their capabilities best, don’t back them…why should others?”

Neis, whose firm also has an office in Michigan, said the experience in that state showed multiple benefits, including the arrival of venture capital funds from elsewhere to pursue deals.

Wisconsin has a cadre of major companies. It has experienced investors in angel capital networks and stand-alone funds. Increasingly, it has the right talent and ideas.

What’s needed now is a shared sense of opportunity about reinvesting in Wisconsin and a few corporate champions to take up the challenge. The potential is there.