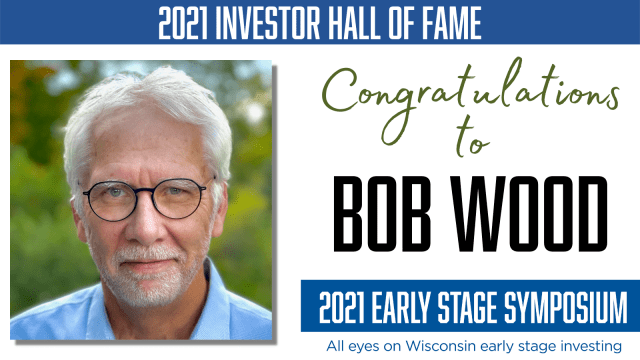 Bob Wood, who has mentored scores of young companies while helping to lead one of Wisconsin’s oldest and largest angel networks, will be inducted into the Wisconsin Technology Council’s “George Mosher Memorial Investor Hall of Fame” during the Nov. 3-4  Wisconsin Early Stage Symposium.

Active in Madison-based Wisconsin Investment Partners since its inception in 2000, Wood will be honored Nov. 3 at a dinner with fellow investors from across Wisconsin, the Upper Midwest and beyond. The dinner is sponsored by Baird Capital and Signature Bank.

The “Investor Hall of Fame” was established by the Tech Council to highlight the importance of angel and venture investors to the early stage economy. It was renamed in 2019 in honor of the late George Mosher, one of the first inductees and a prolific angel investor.

Along with Golden Angels Investors in the Milwaukee area, WIP is one of the state’s largest angel investment groups. It includes more than 100 angel investors with vast industry expertise. The network has invested in more than 75 companies, including about 40 current investments. Over the past five years, it has invested at least $3.5 million annually. It is consistently ranked among the 10 most active angel groups nationally, according to the Halo Report.

Wood’s background includes the startup through sale of Space-Metrics LLC, a manufacturing firm specializing in commercial and residential cabinetry, store fixtures and office furniture. He was involved in the startup of American Players Theatre and urban redevelopment projects such as “Capitol Point” and ‘Nolen Shore’ in Madison. He remains a WIP co-manager.

“Bob Wood was one of the first major angel investors in Wisconsin,” said Tom Still, president of the Tech Council. “Through his quiet style and patient mentoring, he has consistently stepped forward to help young companies and entrepreneurs.”