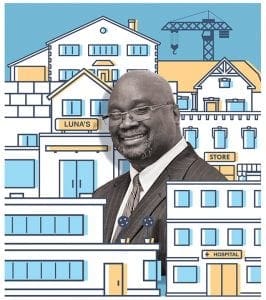 As an urban planner by training and heart, Ruben Anthony knows development is a good thing. But not all development is created equal. For most economic development planning, African Americans, Latinos and poor people are on the outside looking in, says Anthony, president and CEO of the Urban League of Greater Madison.

That’s what Anthony plans to change with a proposed economic development business hub along Madison’s South Park Street corridor, which got a $2 million investment in Dane County Executive Joe Parisi’s 2021 budget. Anthony’s vision is a mix of incubator, retail and executive space for racial minority-owned businesses; banks or real estate agencies investing in disenfranchised communities; entrepreneurial startup and business development services, such as the Wisconsin Women’s Business Initiative Corp. and the Wisconsin Alumni Research Foundation’s UpStart; and affordable housing and condominiums owned by the people who live and work there. It has to be big, it has to be visible, and it has to serve, first and foremost, the people of south Madison.

“Gentrification that doesn’t take into consideration the folks who are currently in that neighborhood is bad,” says Anthony, who grew up in the New York area. Now when he visits Harlem, he sees “nothing but white people.” The building his aunt lived in is a doctor’s office. Families he knew are long gone, priced out. In Madison, the East Washington Avenue corridor has seen significant investment “but I don’t see any Black investment there,” he says. “We want people to know that this is for the south Madison community. We don’t want to displace, we want to include.”