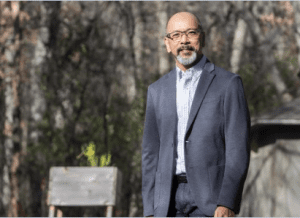 For years, Javier worked in various executive roles at different startup companies, growing their value until they were acquired by larger companies. Prior to working with startups, he was an account executive with insurance giant Cigna in Chicago.

But when an opportunity opened at a government agency in Madison, he eagerly pursued it. Javier currently serves Wisconsin as entrepreneurship program director at the Wisconsin Economic Development Corp., a department that funds and supports initiatives that advance startup activity across the state. It’s a role that allows Javier to combine his startup and corporate world experience, he said.

“Not everyone has the bandwidth or the passion to say ‘I’m going to pay it forward,'” Javier said. “That’s what we need in Wisconsin, is more people paying it forward because that’s where our current and new entrepreneurs can learn from the folks that actually did it.”

Javier worked at Cigna for seven years, during which time he earned his master’s in business administration at DePaul University, which Cigna paid for. For two years, Javier balanced working a day job while taking night classes at DePaul, and after earning his degree, he became an adjunct professor at Robert Morris College in Chicago. By 2000, however, Javier noticed the rapid growth of internet-based companies and decided to shift careers.