TIME: Inside the Facilities Making the World’s Most Prevalent COVID-19 Vaccine 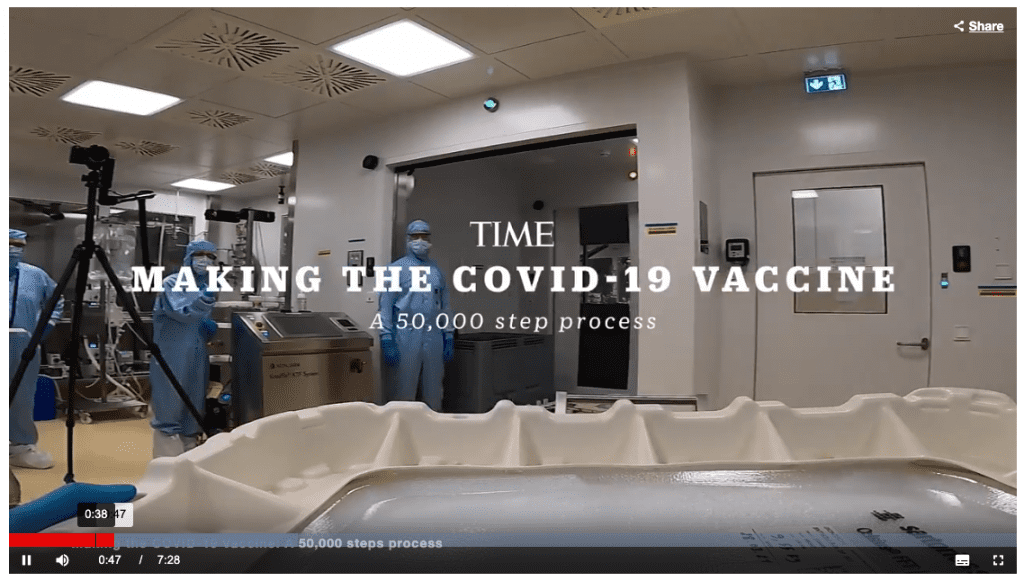 If you’ve been vaccinated for COVID-19, chances are pretty high that you’re benefiting from a product made by BioNTech. The German biotech company, co-founded by a husband-and-wife team of scientists, developed the vaccine that became not only the first to earn authorization in the U.S. for COVID-19 in December but also the first ever based on a new technology involving the genetic material mRNA.

In interviews in December and March, co-founders Ugur Sahin and Ozlem Tureci spoke about their whirlwind year and their partnership with U.S. pharmaceutical company Pfizer to test and manufacture the vaccine. Over three days in late March, they also opened up their new manufacturing plant to TIME for the first step-by-step look at how their lifesaving, and potentially pandemic-ending, vaccine is made.

When Sahin read a scientific paper in late January 2020 describing the first identified cases of COVID-19 in Wuhan, China, “it was very clear to me that this was not a local outbreak anymore,” he says. “And most likely the virus had already spread worldwide.”

He knew there was no time to waste. But BioNTech, based in Mainz, was then primarily a cancer-vaccine company; after more than a decade of research and development, the company had tested its mRNA-based cancer vaccines in about 400 people, with encouraging results. They were just exploring the possibility of creating vaccines against infectious diseases–specifically an mRNA-based vaccine against flu–when COVID-19 hit.

“[Ugur] convinced all of us, including our board, colleagues and scientific teams, that this was now our calling and we have to follow this mission,” says Tureci. At an emergency meeting, Sahin urged a 40-member team to “move with the speed of light” toward the company’s new goal of developing a COVID-19 vaccine. The team, which grew to more than 200, worked nights and through holidays on Project Lightspeed, and after several weeks had produced 20 candidates. An unprecedented four showed promise in neutralizing the virus. “There was a clear message that this has to be the priority,” says Andreas Kuhn, senior vice president of RNA biochemistry and manufacturing at BioNTech. “Whatever you’re doing right now, kind of forget about it because this is the most important thing now.”

With so little known about the new virus, the team turned to what was known about two related coronaviruses: SARS and MERS. Soon it had a 50,000-step process for building an mRNA vaccine against the new coronavirus, SARS-CoV-2.