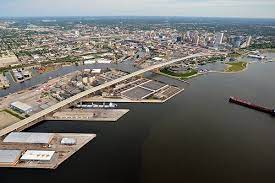 Investment in intermodal container stations and statewide transportation infrastructure will help Wisconsin’s agriculture sector grow and be competitive on a national and international scale.

That’s one of the takeaways from yesterday’s World Trade Association virtual event on boosting the state’s international ag trade through improvements at Port Milwaukee and around the state.

“The intermodal container has been an issue for a long, long time,” said Port Milwaukee Director Adam Tindall-Schlicht. “This has been a known issue that is a roadblock to further expansion and flourishing export based economy for Wisconsin agriculture.”

Brown also highlighted Wisconsin’s need for more intermodal container facilities throughout the state, saying it was the “first and foremost” wish she has as both the state and federal government discuss infrastructure funding plans.

“Wisconsin doesn’t have any intermodal ports, and we don’t have any opportunity to work within the state,” Brown said. “We struggled to find places to load.”

We would find that having the availability of containers would be very beneficial to what we’re doing.

Gov. Tony Evers’ administration plans to grow the state’s presence in the global market by allotting more than $2.1 million for the Wisconsin Initiative for Agriculture Export in the 2021-2023 budget making its way through the Legislature, Romanski said. The initiative is intended to encourage international marketing for Wisconsin’s agriculture.

“In order to maintain Wisconsin’s position as an international leader in the agriculture industry, we have to invest in our strengths,” Romanski said.

DATCP is also working with the Wisconsin Economic Development Corp. to create a plan that would disperse $5 million over five years to increase Wisconsin’s agricultural exports by 25 percent by 2026.

The Port of Milwaukee is building a bulk transport loading facility to increase Wisconsin’s exporting capacity. Financed by state, federal and private grants, the project will cost $35 million. The loading facility is estimated to be open for the international shipping season in April 2023.

“This is a huge win-win,” Tindall-Schlicht said. “A win not only for Wisconsin farmers that are looking for increased efficiencies and reaching world market specifically via exports in bulk shipments but a win for Wisconsin.”

Investments in projects like the Port Milwaukee project will increase market access for Wisconsin farmers and businesses, Romanski said.