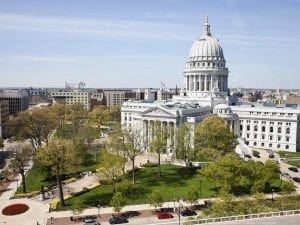 Despite record-breaking fundraising activity by early-stage Wisconsin companies last year, the state still lags behind its Midwest neighbors, according to a Wisconsin Technology Council report released this week.

Early-stage Wisconsin companies raised more than $483 million in 2020 in at least 114 deals — the most money raised in a year since the council began collecting the data in 2008. In 2019, startups in the state raised $454 million across 123 deals.

The money came from a mix of venture capital and angel investors, crowdfunding campaigns and accelerator programs, according to the report. It was primarily equity financing but also included debt and seed capital.

Venture capital firms invested $293 million in Wisconsin companies in 2020, compared with more than $3 billion in Michigan startups, $2.5 billion in Illinois firms and $1.8 billion in Minnesota companies, according to PitchBook data published by the National Venture Capital Association (NVCA) in March.

“Other states are doing more to support their early-stage economies through policy initiatives such as ‘funds of funds’ that lever public and private investment,” Tech Council president Tom Still said in a statement.