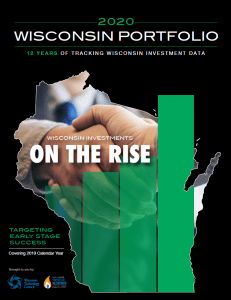 Wisconsin’s venture capital ecosystem continues to mature in 2019 after the state’s early stage firms raised a record of more than $450 million in venture capital.

To an extent, these large funding rounds in 2019 skew the data for the overall growth of Wisconsin’s venture capital ecosystem. However, underlying metrics found in the report reveal last year’s progress in the ecosystem may not be an anomaly.

A five-year rolling average of venture dollars raised in the state still shows a positive trend, increasing by 68 percent since 2015, according to the report. Also noteworthy is that fifty-two companies received first-time funding in 2019, up from 32 in 2018.

“That shows there’s more venture-backed startups being established and grown in the state and that’s promising,” said Matt Cordio, co-founder and president of Skills Pipeline and Startup Milwaukee. “That shows the ecosystem is getting healthier and more robust.”