A guide to Wisconsin’s technology and entrepreneurial milestones. 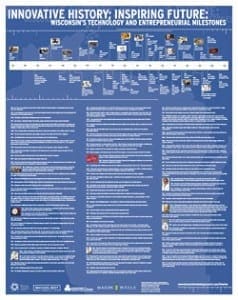 Wisconsin has a rich history of innovation and entrepreneurial activity. From its territorial days to the first decade of the 21st century, the state has produced ideas, inventions and intellectual property that have improved life for millions of people in Wisconsin and around the world.

Understanding Wisconsin’s entrepreneurial past is critical to envisioning its exciting future as a place to work, live and grow a business. We have built a foundation of innovation over the years, and we continue to welcome people, ideas and companies that will strengthen that base as we reach new heights as a state and a region.

As you read this timeline, you will come across many familiar names from the fields of science, agriculture and manufacturing — from Babcock to Temin, from Kohler to Thomson, and from Evinrude to DeLuca. These pioneers help tell the story of Wisconsin through their enduring legacies.

Wisconsin’s combination of educational, research and business resources have made this a state where innovation is a way of life. Please read on to learn more.

1844 – On a farm near Janesville, George Esterly invents the first harvesting machine. He subsequently invents several other farm implements.

1858 – On his stepfather’s Iowa County farm, John Francis Appleby invents the basic knotting device that would become the foundation for all farm binding machinery.

1878 – Wisconsin hosts the nation’s first automobile race when the state offers $10,000 to the inventor of a machine that can move from Green Bay to Madison under its own power. With an average speed of six miles per hour, it takes Alexander Gallagher of Oshkosh about 22 hours to win the race.

1878 – John Francis Appleby of Mazomanie invents the twine binder, which would become the basis for farm machines produced by the McCormick, Champion and Osborn companies.

1880s – Harry Armenius Miller of Menomonie invents the first motorcycle by attaching a one-cylinder engine to a bicycle.

1882 – The first commercial hydroelectric plant begins to operate on the rapids of the Fox River in Appleton.

1883 — Warren S. Johnson, a professor at the State Normal School in Whitewater, Wisconsin, receives a patent for the first electric room thermostat. His invention launched the building control industry and was the impetus for a new company, today known as Johnson Controls.

1885 – George Hinkley invents the band sawmill and installs it at the Jump River Lumber Company in Prentice.

1885 – Joseph Steinwand develops a new product at the cheese factory he and his father operate. He names it for the nearby town of Colby.

1889 – Working out of a red brick barn in Milwaukee, Gottfried Schloemer builds the first gasoline-driven automobile, the Motor Wagon.

1890 – University of Wisconsin professor Stephen Babcock develops a tester for measuring the amount of butterfat in milk, helping Wisconsin earn its reputation as America’s Dairyland.

1891 – Franklin King, a professor of natural science at River Falls State Normal School, develops the round silo. The new design solves the problem of storing winter cattle silage and allows dairying to advance as a major farming sector in Wisconsin.

1892 – Wisconsin becomes the first state to use the tuberculin test to detect TB in cattle, solidifying the state’s reputation as a leader in the production of beef and cheese.

1894 – Wisconsin bacteriologists tested and then autopsied the first tuberculin-infected dairy herd in the nation.

1895 – Bacteriologists in Wisconsin develop proper methods for pasteurization of milk and heat treatment of canning peas.

1910 – Two engineers from Racine, Chester Beach and Frederick Osius, and a master marketer, Louis Hamilton, make household appliance history by inventing a small motor that ran on either AC or DC electrical power. The first Hamilton-Beach product was an electric, hand-held massager. The new motor, known as the fractional horsepower motor, revolutionized the appliance industry.

1912 – Beloit’s Arthur P. Warner perfects the automobile speedometer, which would become standard equipment on every vehicle produced in the United States.

1913 – Researchers at the University of Wisconsin create the first U.S. program to produce potato seed free from diseases that were devastating the crop.

1918 – The University of Wisconsin creates the first genetics department in the United States.

1927 – John Hammes of Racine invests the first kitchen garbage disposal and founds In-Sink-Erator to manufacture them.

1928 – Wisconsin researchers find that adding copper and iron salts to the diet could prevent anemia.

1930 – Harry Harlow is the first to prove that monkeys could learn.  He was also able to illustrate through his monkey subjects that there is a biological basis of attachment between mother and infant.  He was awarded the National Medal of Science – the nation’s highest scientific honor – for his work.

1933 – Wisconsin develops the nation’s first large-scale demonstration of soil and water conservation at the Coon Creek Watershed in Vernon County.

1936 — Anethesiologist Ralph Waters of the University of Wisconsin announces the results of his ground-breaking research, which marked the transition from the use of ether to a more effective and safer cyclopropane for anesthesia.

1936 – Physician/scientist Frederic E. Mohs of Madison pioneers a micrographic surgery technique to treat skin cancer. The “Mohs Surgery” technique relied on extremely precise dissections of tumors instead of the gross removal of tumor masses, and is still in widespread use today.

1937 – University of Wisconsin scientist Conrad Elvehjem discovers another of the B vitamins: Niacin.  His discovery was used to cure pellagra.

1941 – University of Wisconsin professors Karl Paul Link and Harold Campbell report the isolation of dicumarol (courmarin), the first of the oral anticoagulants now widely used in surgery and the treatment of circulatory disorders.

1942 – Scientists begin work on mass penicillin production.  Their techniques eventually make this infection-controlling drug widely available at a modest cost — $60 per standard dose in 1943, compared to less than 25 cents today.

1949 – University of Wisconsin biochemists announce development of Warfarin, one of the world’s most effective and widely used rat killers.

1950s – Pediatrician and biochemist Harry Waisman identifies a way to combat phenylketonuria (PKU), a condition suspected of causing mental retardation.  His efforts led to the mandatory screening for PKU at birth.

1951 – First embryo transplants in cattle are made.  A fertilized ovum is transplanted from one cow to another cow, which then gives birth to the calf.

1953 – Dale Wurster of the University of Wisconsin develops a pharmaceutical tablet coating technique that masks the unpleasant taste of drugs and helps to control their release in the body.

1957 – Researchers at the McArdle Laboratory for Cancer Research synthesize fluorouracil, a drug used widely to treat a variety of cancers.

1957 – Manucher Javid of Madison invents a “uera solution” to relieve the swelling of tissues during brain surgery.

1958 — Dr. Joshua Lederberg is awarded a Nobel Prize for his work on how bacteria reproduce and produce resistance to antibiotics.

1960s – Dr. Hector DeLuca of the UW discovers how Vitamin D regulates calcium levels in the body. His research enables other faculty to treat osteoporosis.

1968 – A team of scientists and surgeons at the University of Wisconsin in Madison performs the first successful bone marrow transplant.

1968 – Dr. Hector DeLuca heads a team of researchers at the University of Wisconsin who isolate a Vitamin D derivative which can be used to enrich foods.

1968 – A device built at the University of Wisconsin becomes the first observatory to look at space from space and paves the way for further space-based observatories such as the Hubble Space Telescope.

1968 – Molecular biologist Har Gobind Khorana shares in the Nobel Prize for his work in describing the genetic code and how it operates in protein synthesis. He was also the first to synthesize oligonucleotides, or strings of nucleotides. These custom-designed pieces of artificial genes are widely used in biology labs for sequencing, cloning and engineering new plants and animals.

1970s – UW geneticist Dr. Howard Temin discovers how tumor viruses affect the genetical material of the cell through reverse transcriptase. This upset the widely held belief at the time of the “central dogma” of molecular biology by Nobel laureate Francis Crick, one of the co-discoverers of the structure of DNA. Temin shared in the 1975 Nobel Prize.

1971 – Biochemists identify and synthesize the hormone the body makes from vitamin D, which led to treatments to prevent bone loss in individuals with kidney and parathyroid diseases.

1976 — Medical physicist Charles Mistretta pioneers new x-ray and computer technology to produce images of blood vessels. Along with Paul Moran, he is a developer of Magnetic Resonance Imaging, better known as MRI.

1976 – Veterinary scientists describe a biological agent smaller than the smallest virus as being responsible for a highly fatal disease of mink and show that the ailment is closely related to scrapie disease in sheep.

1977 – UW-Madison professor Larry Landweber creates “Theorynet,” which provides electronic mail to more than 100 computer science researchers via a locally developed e-mail system called Telenet. Two years later, Landweber organizes a meeting between Wisconsin researchers, DARPA, the National Science Foundation and other computer scientists to establish a Computer Science Department research computer network. It is among the origins of the Internet.

1980s – Horticulturists at the University of Wisconsin College of Agriculture & Life Sciences are first to clone a plant gene.

1980s – Animal scientists identified strains of swine with genetic differences in their ability to metabolize cholesterol and their susceptibility to heart disease.  Their discovery became an important model for evaluating heart disease therapies.

1980 – Charles Mistretta and other researchers at the University of Wisconsin pioneer the digital subtraction angioplasty (DSA), a digital imaging technique which was viewed as an essential part of the image reconstruction process in CT and MR imaging.

1981 – Biotyping of Newcastle disease virus in poultry and birds provides way to control introduction of the disease into the United States.

1981 – The first transgenic plant (bean protein in sunflowers) demonstrates the potential for genetic engineering in plants.

1983 – The world’s first test-tube rhesus monkey, Petri, is born on the University of Wisconsin campus.

1985 – Virologist Roland Rueckert produces the first three-dimensional picture of a cold virus.  His atom-by-atom rendering revealed that no cold vaccine could ever be developed, as the places where a vaccine would work are inaccessible to antibodies.

1986 – Researchers at the University of Wisconsin College of Agriculture & Life Sciences were the first to put a gene into a woody plant cell and then regenerate an entire tree from that cell.

1987 – UW-Madison Dr. Folkert Belzer and James Southard develop a solution to preserve organs for transplant for longer periods of time.

1987 – Scientists at the University of Wisconsin clone cattle for the first time, proving it was possible to produce elite strains of livestock valued by producers and consumers.

1987 – Lysozyme, a natural compound in tears, is found to kill bacteria that cause food poisoning.

1990 – Dairy scientists developed a genetic technique to identify dairy sires carrying a gene that leads to better performance in their offspring.

1993 – Biochemists revolutionize our understanding of how muscles operate by producing detailed images of the muscle protein myosin.

1997 – Researchers decode all of the genes of Escherichia coli (E. coli), a bacterium widely used in biological research and industry.

1997 – Scientists discovered a new group of bacterial toxins whose genes can be moved into plants to protect crops from insects without applying pesticides.

1997 – Chemical engineer Regina Murphy and chemist Laura Kiessling discover a possible treatment for Alzheimer’s patients by designing “inhibitor molecules” that disrupt the proteins that form poisonous deposits in the brains of Alzheimer’s patients.

1999 – A University of Wisconsin research team makes a breakthrough in DNA computing. The university team created a crude molecular computer “chip” made of a small glass plate covered with a thin layer of gold, making real the possibility of ultrahigh-capacity storage and massively parallel searches.

2006 – A team of scientists from the University of Wisconsin-Madison report the discovery of a method for making human collagen in the lab.  Their work opens the door to producing a material that can have broad use in medicine and replace the animal products that are now used but that can also harbor pathogens or spark undesirable immune responses.