At the Wisconsin Technology Council, we believe there are many reasons why companies, investors and other institutions should invest or otherwise do business in Wisconsin. Those range from its efficient agricultural sector to its modernized manufacturing community to its growing high technology economy.

THE RIGHT PEOPLE: Wisconsin offers a well-trained, educated workforce with an outstanding work ethic and proven adaptability. High-school graduation rates and higher education graduation rates in Wisconsin are on the rise. In the technology sector, Wisconsin is building a cadre of experienced managers, many of whom have taken companies from the startup level to acquisition, merger or initial public offering.

A WARM INVESTMENT CLIMATE: The enactment of investor tax credits and the creation of an early stage investing infrastructure through the Tech Council Investor Networks have combined to spur increases in the number of angel networks and funds (from six in late 2004 to about 40 today). The number of early-stage deals steadily tops 110 per year and the amount invested in early-stage deals ($810 million in 2021) has set records in each of the last three years. Wisconsin has carefully expanded its investor tax credit program, which attracts four private dollars for every $1 in state credits. The creation of the Badger Fund of Funds has made the state an investor in about 30 early-stage deals.

AN INVITING PLACE FOR ENTREPRENEURS: Wisconsin has created an integrated portfolio of services, both public and private, for entrepreneurs and early-stage companies. The effort is paying off. Reports such as Cyberstates show the state creating thousands of tech jobs, and Wisconsin cities often rank high in studies by organizations such as the Brookings Institution and the Chicago Council on Global Affairs. The Wisconsin Economic Development Corp. has built a network of partners, including the Tech Council, that serve ‘treps across the state.

COMPETITIVE BUSINESS COSTS: Doing business in Wisconsin can translate directly into savings. Construction and operating costs are lower than other areas of the country. Utility costs are typically less than the national average. Land costs are competitive; “shovel-ready” sites and quality labor are available at fair prices. Corporate income taxes, personal income taxes and sales taxes are competitive with all bordering states. Wisconsin has dropped from having one of the top five tax burdens 20 years ago to 15th overall in 2020.

WORLD-CLASS ACADEMIC R&D: Wisconsin institutions conduct nearly $1.7 billion per year in academic research and development, according to National Science Foundation figures. It’s led by the UW-Madison with more than $1.3 billion in research spending per year, among the top 10 in the nation. Other leaders are the Medical College of Wisconsin, UW-Milwaukee, Marquette University, the Milwaukee School of Engineering and the Marshfield Clinic. The UW-Madison Institutes for Discovery is the only interdisciplinary research center of its kind in the United States outside the East and West coasts. The Great Lakes Bioenergy Research Center is one of four such federally sponsored laboratories in United States. The U.S. Forest Products and National Wildlife laboratories are also in Wisconsin. The WiSys Technology Foundation works with many of the state’s non-doctoral campuses.

A THRIVING LIFE SCIENCES SECTOR: The biosciences are a multi-billion-dollar industry in Wisconsin, including more than 1,700 businesses of all sizes and 46,000 workers in medical, industrial and environmental biotechnology, health information, medical devices, healthcare and value-added agriculture. Wisconsin is ranked in the top 10 for biotechnology employment growth. Epic is a national leader in health IT; Promega is a world supplier of biotech assays; Exact Sciences is a leader in cancer research; GE Healthcare has about 5,000 employees in Wisconsin alone.

HIGH-TECH MARKETS ARE HOT, TOO: Information technology and other high-tech goods and services are a thriving sector in Wisconsin. Drawn by the quality of academic research in Madison, Milwaukee and beyond, Microsoft and Google operate research offices in the state. The Mayo Clinic has engaged in a partnership with UW-Eau Claire. Cyberstates 2021, an industry review, showed Wisconsin with more than 216,000 net technology jobs. Cyberstates also showed Wisconsin among per capita employment leaders in electromedical equipment manufacturing, electronic components manufacturing and software publishing. The state’s median high-tech salary is $71,100, according to Cyberstates, which is 63% higher than the overall median. The state consistently ranks among the nation’s leaders in the number of patents issued.

THE RIGHT LOCATION AND EXCELLENT QUALITY OF LIFE: Wisconsin lies in the heart of the I-Q Corridor, a 400-mile stretch that includes Chicago to the south and the Twin Cities of Minnesota to the northwest. The corridor offers a world-class combination of talent, capital and research. Not only do Wisconsin and the I-Q Corridor provide a safe zone from many natural disasters, it’s also well insulated from other security and infrastructure concerns. The region is statistically one of the safest areas in the United States. Madison, La Crosse, Appleton, Green Bay and other Wisconsin communities have recently showed up in “best places” magazine rankings, such as Fast Company, National Geographic and Money. 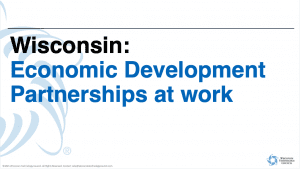 Event (2/28 @SheratonMadison): @UWMadison's single biggest major is #computerscience. Learn why that matters to you at our #Innovation Network luncheon.