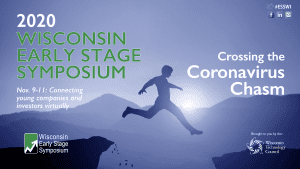 A growing national network that could build on Wisconsin’s tradition of manufacturing, agricultural and nature resource excellence will be described during the 2020 Wisconsin Early Stage Symposium, to be held on a virtual platform Nov. 9-11. Registration is now open!

Michael Koeris, the founding chief executive officer of the BioIndustrial Institute of Manufacturng Excellence, will join with Mary Blanchard of the Madison-based Wisconsin Energy Institute (WEI) for a 10:15 a.m., Nov. 11 panel discussion. It will be led by former state government cabinet secretary Karen Timberlake, now with Michael Best Strategies.

California-based Koeris has a background as a venture capital-backed entrepreneur, which will help the work of BIIOME as it works with industry to develop advanced products, fuels and more from raw materials. Koeris is also taking part in the symposium’s “Investor Intros” Nov. 9.

“Wisconsin has long produced food and forest products that power the nation,” said Tom Still, president of the Wisconsin Technology Council. “It is also a leader in manufacturing. The creation of the national BIIOME will help to pull those sectors closer together through a partnership involving major companies, researchers and sources of organic materials. Entrepreneurs and investors alike can benefit by learning more.”

Bio-industrial processes seek to turn renewable non-food resources, organic waste and gaseous waste into fuels, materials and chemicals that can touch a full range of Wisconsin industries, such as agriculture, forestry, biotechnology, consumer products and manufacturing.