Inside Wisconsin: Looking back on the year: Hits, walks and a few whiffs 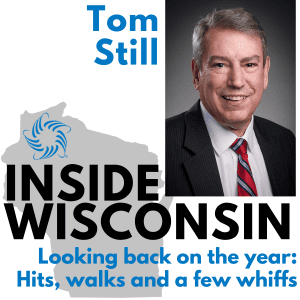 MADISON, Wis. – Part of the fun of writing a regular column is looking back to see what ideas and even predictions stuck. That same hindsight can also be a curse, especially if you’re wrong. With the year nearly done, it’s time to review selected columns by date:

Jan. 15: “Enduring data privacy relies in part on consumers thinking through their own online habits, as well as companies adopting a culture of respect for the identifiable data they collect. It also makes sense to have national rules that encourage continued innovation while protecting people in whatever state they call home.” Well, nothing happened on this front in Congress. Perhaps the COVID-19 pandemic got in the way, but most states won’t wait forever to adopt their own rules.

Jan. 23: “Epic executives say their electronic health records are routinely improving lives and even saving them. For example, the lead poisoning crisis in Flint, Mich., was uncovered by a pediatrician who used Epic records to spot trends in young patients. Public health crises such as flu epidemics can also be fought through digital health data.” That was pre-COVID and, indeed, the Verona-based Epic Health Research Network has since provided valuable insights to clinicians around the country.

Feb. 26: “Here’s the sobering news: Don’t expect a COVID-19 vaccine to show up at your corner drug store any time soon. Vaccines are notoriously hard to create, test and produce, usually taking years to develop.” Partly correct, partly off. Some safe and effective vaccines were developed and approved in record time, but it will be spring or summer before most people can get a shot.

April 2: “The size of the COVID-19 wave and how it is distributed over time will make a major difference for all hospitals, urban or rural, but the availability of such facilities somewhat evenly across Wisconsin means the state may be better prepared than places that have experienced a decline in the number of rural beds.” That’s held up well. While some Wisconsin hospitals were nearing capacity during the November surge, the Wisconsin Hospital Association COVID-19 dashboard shows beds and equipment are available. That’s not the case in some states, such as California.

April 23: “At some point, it should no longer fall to government to decide what businesses are ‘essential’ and which are not, but to assess which businesses follow rigorous safety and sanitation rules and which do not. That’s a matter for public health inspections, a normal duty of government, versus an arbitrary designation of which businesses and jobs matter more than others.” Some jurisdictions still don’t get it, and they’re paying the price in permanently closed businesses.

June 10: “(Angel and venture capital) deals are still getting done in 2020, although not as many as transpired in 2019 and perhaps not always on terms entrepreneurs once envisioned. Even during a pandemic, a winning team, a solid business plan and innovative technology may still attract the money it needs.” True enough for most young companies, but some are still out in the cold.

July 9: “Reopening schools need not be a threat to students. The American Academy of Pediatrics has concluded the harm to children from not having in-person education is greater than the risk posed by COVID-19. Poor children may be missing meals, child abuse instances may have gone underground, special needs students aren’t getting as much help, and further disruption in learning will have lasting effects on a whole cohort of students.” That notion is increasingly resonating with policymakers everywhere, and parents in some parts of the country are demanding that schools go “live” once again.

Aug 5: “As Congress and the White House debate how to further respond to COVID-19, improving ‘hard’ infrastructure needs such as roads, bridges, railroads and more has attracted attention. The communications infrastructure represented by broadband should be no less vital at a time when the nation’s digital divide threatens to deepen.” The latest federal stimulus package, for all its flaws, contains money to invest in better broadband.

Nov. 18: “Winter is coming, the COVID-19 pandemic is raging on and cyber-criminals are more focused on the United States than any other nation. It’s not that Chris Krebs would have been retained by the Biden administration, but was this a smart time to fire the guy at the head of the nation’s cybersecurity pyramid along with key members of his team? That answer is a resounding no.” Within weeks came news that a highly sophisticated cyber-attack, most likely directed through Russia, had taken place on Krebs’ watch. “We missed it … a bunch of other folks missed it,” he said Dec. 20. Ask any columnist: Misses are part of the game.