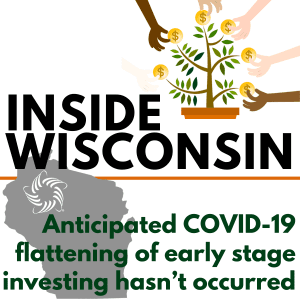 MADISON, Wis. – A funny thing happened on the way to the predicted pancaking of the U.S. early stage investing market. It hasn’t happened yet.

Not that angel and venture capital investments are soaring near the heady dollar and deal figures seen in 2018 and most of 2019, but the COVID-19 pandemic hasn’t collapsed the market nearly as much as some experts feared.

It’s a trend reflected in the upcoming Wisconsin Early Stage Symposium, which has attracted a record number on investor groups to the virtual event along with a competitive collection of young companies that are trying to catch the eyes of those investors.

Maybe it’s because the Nov. 9-11 Early Stage conference is virtual this year for the first time in its history and investors can take part from afar, or record-low interest rates has money chasing better places to roost, or Wisconsin’s reputation for having a tech-diverse mix of emerging companies is gathering momentum. Or perhaps it’s a combination of all three.

For whatever reasons, the same lack of panic that characterizes the national angel and venture capital markets appears evident closer to home.

“Overall, the startup ecosystem has shown resilience in the face of COVID-19 and other turmoil this year,” read a VentureBeat report based on the Pitchbook-National Venture Capital Association monitor. “Venture capital investments slowed in the third quarter amidst pandemic-induced uncertainty, but angel investors stepped up with a greater share of investments.”

“… Parts of the startup ecosystem are responding admirably to the grave challenges currently facing the U.S. economy,” VentureBeat reported. “Startups and entrepreneurs are moving aggressively to address major challenges such as climate change, health care, COVID-19 and more. Sectors like gaming are exploding, while other spaces are being reimagined.”

Not everything is rainbows and unicorns. Companies looking for their first funding rounds are having a tougher time, as are female entrepreneurs and other young companies led by people from diverse backgrounds. It’s simply harder for new entrants to make their case over a computer screen versus live.

Would more diversity among investors themselves make a difference? That question was explored Oct. 13 in a webinar hosted by the Wisconsin Technology Council. Among those taking part in the panel discussion were three of the state’s Black investors.

Nettles is a former state Department of Commerce secretary who was one of the architects of Wisconsin’s investor tax credit law.

Fields, who is retiring from the Wisconsin Legislature to focus more time on his Dark Knight Capital Ventures fund, noted that Black and Latino deals make up less than 5 percent of all angel and venture capital activity.

Also taking part were William Martin, founder of the Badger Opportunity Zone, and Erik Iverson, chief executive officer of the Wisconsin Alumni Research Foundation. Iverson said he plans to ask his board of directors about creating a dedicated investment sleeve focused on diverse fund managers.

The COVID-19 pandemic is far from over, it appears, and things could still take a turn for the worse for everyone – young companies included. For now, however, the expected collapse of early stage investing has yet to occur. Instead, it’s looking more like a transition.