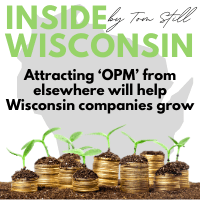 MADISON, Wis. – Cultured Decadence may sound like a societal dilemma, but it’s precisely the opposite. It’s a young company offering a timely solution – all the while demonstrating how emerging companies in Wisconsin can attract investors from elsewhere.

Cultured Decadence is working to produce nutritious, sustainable seafood by creating meat from animal cells. It is starting with lobster, a species under pressure in many natural habitats due to overfishing and warmer, more acidic waters.

While it may seem far-fetched to those unfamiliar with the “alternative protein” food movement, Cultured Decadence will use cells from shellfish, such as lobster, to make real meat without the shell or organs but otherwise just as tasty as what’s caught in the wild.

The idea didn’t seem too futuristic to Revolution’s Rise of the Rest Seed Fund, Bluestein Ventures, Joyance Partners, China-based Dao Foods and other investors who joined with Wisconsin-based funds and organizations this month to invest $1.6 million in Cultured Decadence.

For Revolution, it’s the fourth seed investment in Madison – AirDeck, FactoryFix and Understory being the others. With ties to Steve Case, the former chief executive officer of America Online, Revolution’s two “Rise of the Rest” funds have focused on investing nationwide, especially in places outside the Silicon Valley and other big tech hubs.

Revolution doesn’t “lead” an investment round, however. It follows with money after generally local investors blaze the path. That is standard industry practice for investors who may be too far away to independently conduct due diligence on a deal and then regularly check up on the progress of their portfolios.

It is one of many reasons why the proposal to create a “fund of funds” in Wisconsin, led by a $100-million investment through the state of Wisconsin, makes sense.

If the Wisconsin Legislature approves, the state would join neighbors such as Indiana, Illinois, Ohio and Michigan in creating such a fund, which would be a one-time investment and matched over time by private dollars at a two-to-one ratio. Experience in other states indicate that ratio usually exceeds what’s required, because such funds tend to attract outside dollars – and outside venture capital firms – to locally sourced deals.

While Wisconsin has the talent and technology to compete nationally and beyond, it doesn’t have enough locally managed capital to meet the demand. Even the largest funds in Wisconsin can only take on a limited number of investments, sometimes those prospects are outside their specific sector of expertise but more often because there’s not enough money to go around. In an era when many U.S. venture funds have $1 billion in assets under management, the largest in Wisconsin fall somewhere around the $200 million mark.

For a Wisconsin startup to grow and remain in Wisconsin – creating jobs, tax base and overall economic value – it may often need multiple investment rounds. That usually isn’t accomplished in Wisconsin alone, but through informal investment syndicates that may extend well beyond the state’s borders.

Some companies can do that largely on their own, as Madison-based Fetch Rewards demonstrated in raising a $210-million round that built on previous investment in its unique grocery rewards platform. Fetch Rewards raised a bit of its money over time in Wisconsin, but the vast majority came from outside. Fortunately, the company is staying in Wisconsin, but many others like them can be compelled by their investors to follow the money.

The creation of a state-backed fund of funds will help to combat that problem in Wisconsin because it would use “OPM” – other people’s money – to build on ideas, technologies and companies based here. Perhaps a better acronym is OPSM – other people’s smart money – because investors who may be attracted to already smart Wisconsin deals are seasoned veterans who know how to size up deals and help a young company reach its potential.

Few Wisconsin investors would see a larger fund of funds as competition, but as downstream collaboration for deals they have already vetted and which need multiple rounds of cash to succeed. For the state’s active angel investors, it would be another avenue to follow on the smaller but usually most risky rounds they can offer.

Virtually all net new jobs in the United States are created by companies five years old or younger. The task of building and retaining those companies and jobs would be enhanced by a state-backed fund of funds.