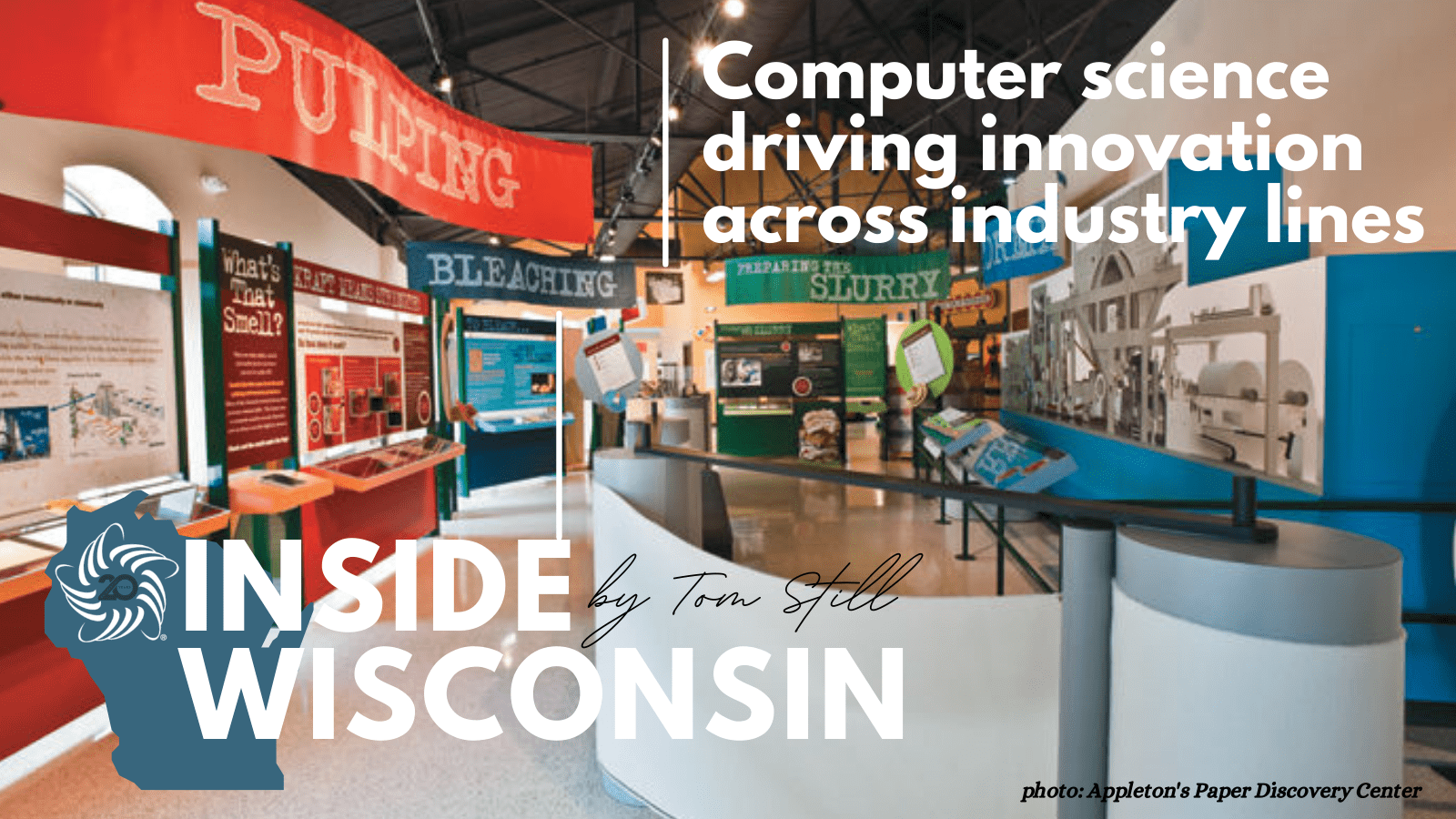 APPLETON, Wis. – The Paper Discovery Center is a microcosm of what made Appleton a commercial and innovation hub a century ago – and it offers a glimpse of what Wisconsin cities like it can become.

Overlooking the rapids on the Fox River, the Paper Discovery Center is a museum and learning center within Appleton’s first paper mill, the 1878 Atlas Mill, a precursor to today’s Kimberly-Clark Corp. The mill has been dormant for years, but the history of Wisconsin’s “paper valley” lives on through exhibits, classes and field trips that engage visitors of all ages in science, technology, engineering, art and math.

On a recent fall day, the Paper Discovery Center was also host to a discussion about how computing is changing the face of virtually every state industry – including those nearly as old as Wisconsin itself.

Tom Erickson, the director of the new UW-Madison School of Computer, Data and Information Sciences, brought a message of statewide engagement with industry to a meeting of the Wisconsin Technology Council board of directors. From tourism to agriculture, and from manufacturing to transportation, computing and data is changing how those sectors perform while inventing new industries along the way.

Created through the merger of three departments, the School of Computer, Data and Information Sciences has an ambitious mission that goes beyond educating the next-generation of “data-heads” – although that remains center stage. Computer Science is already the largest single major on campus and the new Data Science major is the fastest growing. Combined with other sequences, CDIS includes about 3,700 students.

Wisconsin could put them all to work … and then some. Erickson said the state has about 6,600 open computing-related jobs today, of which only a fraction be filled by the combined annual graduates of the state’s post-secondary schools. With such talent in high demand, it’s no surprise the average computing job salary is about $80,000 per year versus $50,000 for a statewide average.

The Department of Computer Sciences at UW-Madison once had a reputation for sending its best and brightest to the Silicon Valley giants and not connecting with Wisconsin businesses. That has changed, with CDIS reaching out to state companies that recognize computing has become an indispensable part of their businesses.

The school has also beefed up its efforts to spur student and faculty entrepreneurism, some of which has been evident in recent angel and venture capital financing of Wisconsin companies.

For example, CDIS recently attracted the internationally known Creative Destruction Lab, which mentors young companies with innovative products and services in the risk, insurance, health and wellness sectors. One veteran investor at the meeting said the CDL is “the best program of its kind” he has seen.

To keep growing, CDIS needs to construct a building that will accommodate students who are not only program majors, but those in other disciplines who believe a core understanding of computer science is necessary in today’s data-driven world. A campaign to finance a $225-million, 320,000-square-foot building on the UW-Madison campus was announced Sept. 17. Private donors have pledged $175 million, but $50 million more is needed to match a “challenge grant” within the total.

Erickson described the building, to be built east of the Wisconsin Institute for Discovery, as “a lighthouse for high tech in Wisconsin.”

Like most states, Wisconsin has a shortage of workers across the board, and computing-related workers are high on the shopping list. Without them, it will be more difficult to build vibrant economies in cities such as Appleton, even if they offer an appealing quality of life to those who would prefer not to live in larger cities.

In 1878, the Atlas Paper Mill was an example of Wisconsin innovation. In 1882, Appleton became home to the world’s first commercial hydroelectric plant. In 1886, it spawned the world’s the first successful commercial electric street railway. Perhaps the next wave of innovation in cities such as Appleton will be led by tomorrow’s computer and data scientists.