InsideWis: Consumer confidence, not orders and lawsuits, will bring economy back 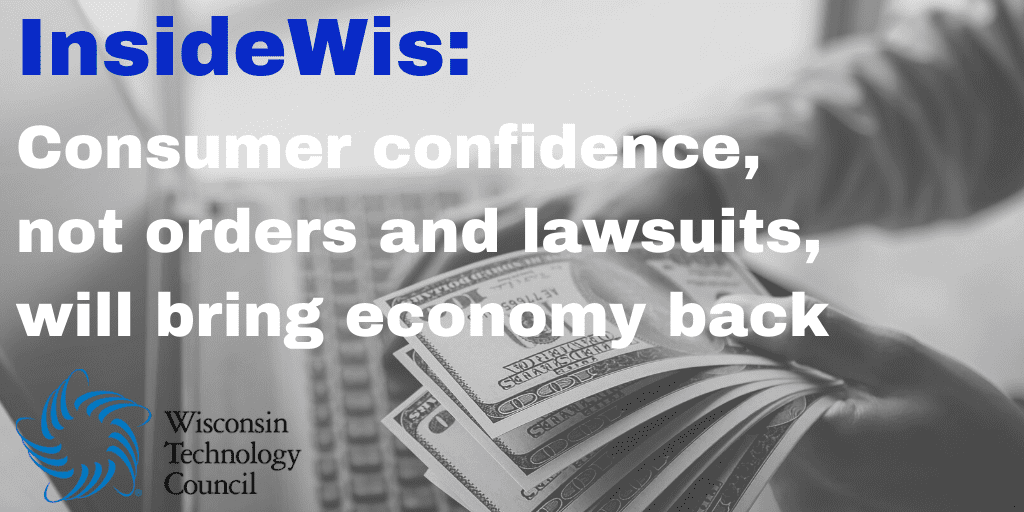 MADISON, Wis. – We ventured out on Madison’s Beltline Highway the other day, noticing as soon as we climbed the entry ramp that something was different.

There was a fair amount of traffic out there.

Not the rush-hour, crawling-speed traffic typical of every Beltline rush hour before the outbreak of COVID-19, but enough to make me wonder if people were beginning to vote with their feet … or, more accurately, their wheels.

Perhaps most of those vehicles were driven by people like us, running an “essential” errand, or others looking for any excuse to get out of the house for a while without needing to encounter another person within six feet.

And yet, I doubt those cars and trucks were filled with people looking to thumb their noses at the “safer at home” order by motoring to places where they could gleefully defy social distancing rules.

There have been notable examples of people rallying to protest “safer at home” or similar orders in Wisconsin and elsewhere, but most Americans have shown remarkable patience with a lockdown that is contradictory to our engrained sense of mobility.

Americans don’t like being told they must confine themselves to one location. That’s consistent with the history of the nation and especially since the invention of the automobile. However, most Americans remain patient with staying cooped up, at least for a while longer, while the coronavirus runs its uncertain course.

An Associated Press-NORC Center for Public Affairs Research poll of 1,057 adults pretty much confirmed that perception when it was released April 22. About eight in 10 people surveyed in the poll, which is constructed to mirror the larger population within a 4% error rate, said they support measures requiring Americans to stay mostly in their homes and limiting gatherings to 10 or fewer people.

Only 12% of those polled said restrictions where they live go too far. More than twice as many, 26%, said they don’t go far enough. About 61% chose the “goldilocks” option, describing steps taken by government officials to control the spread of COVID-19 as being just right.

While society may still be only months away from illegal 1920s-style “speakeasies” in wedding barns, the AP poll shows something is lacking before the economy can be fully reopened. That something is consumer confidence.

Businesses can reopen, but it doesn’t mean people will show up to buy things if they think it’s unsafe to do so. A reasonable measure of confidence will be required before people flock back to bars, restaurants or water parks.

One way to restore consumer confidence is through transparent, science-based plans that function much like scorecards, with regular updates people can follow.

Wisconsin may be headed toward such a system, with metrics that chart how well the state is performing in testing and other indicators such as hospitalizations, deaths and more. Testing is the biggest indicator because without more of it, public health officials, business owners and policy makers alike are shooting in the dark.

Another indicator to include in the mix is how Wisconsin fares in some of the more prominent national computer models, such as those constructed by the University of Washington and the University of Texas. Those models crunch real data to make COVID-19 forecasts.

People can wait longer if they’re presented with weekly evidence of progress … or reality.

At some point, however, it should no longer fall to government to decide what businesses are “essential” and which are not, but to assess which businesses follow rigorous safety and sanitation rules and which do not. That’s a matter for public health inspections, a normal duty of government, versus an arbitrary designation of which businesses and jobs matter more than others.

While not scientific, a survey by the Wisconsin Technology Council revealed that people in the business sector also have misgivings about rushing into reopening the economy.

Asked what would help their businesses most in the months ahead, 16% of the respondents picked immediate lifting of Wisconsin’s “safer at home” order and 46% favored a gradual lifting. The rest favored other options, such as federal Small Business Administration loans arriving before their companies run out of cash.

Lockdowns in Wisconsin and elsewhere are not sustainable forever, or even for very long. They can be safely lifted, however, if restless consumers regain the confidence to believe it’s safe to venture out again.