InsideWis: From closed to unable to find workers, some business managers are frustrated 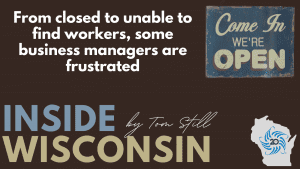 MADISON, Wis. – A longtime advocate for economic development in Wisconsin calls the problem “competing with the couch.”

A chorus of voices from state businesses say they can’t find enough workers to fill open jobs, a trend that might expand as Wisconsin nears the Memorial Day weekend and the traditional start of the summer tourist season.

Leaders of groups such as Wisconsin Manufacturers & Commerce, the National Federation of Independent Business-Wisconsin and more have sounded the alarm, with some specifically faulting the $300 per week in supplemental unemployment benefits from the federal government.

Skeptics counter that employment is slowly bouncing back everywhere, even in states that have accepted the extra benefits, and that worker shortages were a problem long before COVID-19 hit the economy.

“(Continuing the extra benefits) threatens the viability of thousands of businesses and the jobs they provide for workers,” WMC President Kurt Bauer wrote in a letter to Gov. Tony Evers. “If immediate action is not taken, there is a great likelihood that long-term and irreversible damage will be done to Wisconsin’s economy.”

At least nine states have rejected the supplemental benefits, with more considering it, citing the same hiring difficulties as WMC’s Bauer. He is not alone. Bill G. Smith, the state director for NFIB, said 44% of small businesses can’t fill open jobs and more than 90% can’t find “qualified” workers, according to a recent survey. Bill Elliott, president and CEO of the Wisconsin Hotel & Lodging Association, called the hiring famine “brutal” because it comes on the heels of COVID-related shutdowns that hurt his industry.

Unemployed workers are eligible for an additional $300 a week on top of regular state jobless benefits. In his letter to Evers, Bauer noted that unemployed people can get up to $675 per week, which is the equivalent of working full time at $16.75 an hour.

In my own conversations with managers and owners in the hospitality industry, there are occasional stories of job applicants “checking the box.” That means applying for jobs for purposes of meeting certain search requirements, but not showing up for interviews.

Some of those employers suspect they are “competing with the couch” because the extra benefits make staying home the wise financial decision.

In response to criticism, the President Biden said his administration would make clear that people can’t turn down suitable jobs and keep collecting benefits, except in special circumstances. Treasury Secretary Janet Yellen has said there doesn’t appear to be a direct correlation between states that have maintained extra benefits and serious hiring problems.

Finding talent has been a challenge for some business sectors in Wisconsin for years, for reasons that range from Baby Boomer retirements to “brain drain” to the need for retraining of workers who lose their jobs.

Other reasons making it hard for businesses to find workers include a shortage of affordable housing in some places, child-care issues for people who might work later shifts, and compensation at a time when inflation is on the rise (despite the assurances of the Federal Reserve that it’s not real).

Some business owners and managers are solving the problem by offering higher wages, bonuses and other benefits. For others, however, the memory of being compelled to curtail their businesses is still fresh and they don’t have the ability to spend more. It makes those business owners more sensitive to arguments that government actions are keeping able-bodied workers on the sideline.

Overreaction to anecdotal evidence? Perhaps so. Still, it makes sense for government at all levels to take a well-rounded look at the very real problem of unfilled jobs.