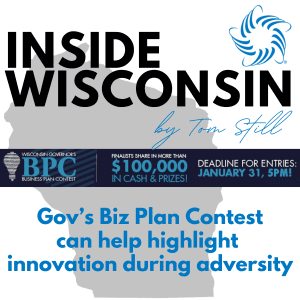 The first eight companies on the list were born during the Great Recession of the late 2000s and the other two during the DotCom bust nearly a decade earlier.

The obvious lesson is that innovation and opportunity can spring from hard times, such as the global pandemic that has throttled much – but not all – of the economy for nine months. Providing an outlet for some of that creativity to get noticed is the goal of the annual Wisconsin Governor’s Business Plan Contest.

Launched in 2004, the contest has returned for 2021 and is open to young companies and individuals whose ideas may be the next big thing. Maybe not as big as Google or Uber, of course, but capable of leaving a mark on the economic map of Wisconsin and beyond.

The deadline to enter online at govsbizplancontest.com is 5 p.m. Jan. 31. At the outset, the contest involves a crisply worded summary outlining the problem a tech-based idea or plan will solve, how it will lead to a successful endeavor, and the kind of competition that may stand in the way. It’s free to enter, is limited to about 250 words at the start of the judged process.

Over time, about 4,100 entries have been logged from 322 distinct Wisconsin communities. About $2.4 million in cash and service prizes have been awarded since 2004 and roughly 425 finalists have raised at least $220 million in grants, angel capital and venture capital.

Most important, those same finalists have a “survival rate” that is about twice the national average for startups – 77 percent, according to separate surveys conducted by the Wisconsin Technology Council.

The secret of business longevity lies mostly in the skill, adaptability and sometimes stubbornness of the entrepreneurs in charge, but some credit goes to resources that contest entrants may more easily tap once they enter.

Independent judges from a mix of business and investment sectors can offer advice, volunteer mentors may do the same, and there’s exposure to a growing array of services and programs for young companies in Wisconsin. It can take a village to raise a startup.

The contest is broad enough in scope to capture most plans. The four contest categories are Advanced Manufacturing, Business Services, Information Technology and Life Sciences.

The competition is conducted in phases, which allows entrants to build their business plan in stages between January and early June. Scoring in each stage whittles down the total number of entrants who move on, but there’s value in simply getting feedback on an idea. There will be chances to meet other entrepreneurs, as well, even if that remains virtual.

Individuals, teams of people or companies may enter if they meet a few requirements:

Adversity can bring out the best in many people and businesses, as past downturns in the economy have demonstrated. Who knows? The 2021 version of the Wisconsin Governor’s Business Plan Contest may provide new examples of success born in tough times.