InsideWis: Guarding Wisconsin’s growth in tech jobs should be part of COVID-19 strategy

MADISON, Wis. – Before the COVID-19 epidemic sunk its bristly microscopic nodes into the economy, Wisconsin’s tech-based sector was making solid progress in jobs, salaries and contribution to the state domestic product. 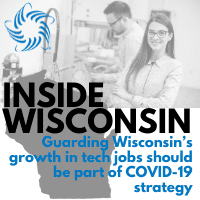 As the outlines of a broader recovery plan emerge, state policymakers should be careful not to conclude that tech businesses will simply take care of themselves.

Wisconsin was 15th among the 50 states and the District of Columbia in boosting the size of its tech-based labor force over the past decade, according to a report by CompTIA, the nation’s largest association of tech companies and other associations.

In fact, Wisconsin outperformed Minnesota, a neighboring state often cited by those who have long aspired to “keep up with the Joneses” to our west.

Wisconsin added 44,389 tech workers during the 10 years ending in 2019, compared to 41,623 for the decade in the Gopher state. Minnesota’s overall tech labor force is still larger than the pool in Wisconsin – 252,000 jobs versus 218,000 – but the cross-border growth rate appears roughly equal for now.

Between 2010 and 2019, tech-related jobs in Wisconsin grew by 25.6%, according to the annual report by CompTIA, which means the tech sector now accounts for 7% of the state’s total economy and 7.1% of the state’s workforce. Net tech employment for Wisconsin increased by roughly 5,000 workers in 2019, a 2.3% increase from 2018 and the 21st-highest increase for any state last year.

The net tech jobs number is a formulaic combination of two categories: 108,545 tech industry jobs and 161,214 tech occupation jobs, the latter number reflecting other professionals who work for tech-based companies.

Wisconsin had 8,635 tech-based “establishments” in 2019, the report concluded, which is still fewer than Minnesota (11,313) but comparable to two other Midwestern states with similar populations, Indiana and Missouri.

The growth in Wisconsin tech establishments is encouraging. Wisconsin showed 7,592 such businesses in 2018 compared with 6,556 in 2017, CompTIA reported. That can include a lot of one-person shops, but the increase suggests there’s more happening with tech-based startups than other national surveys might suggest.

Perhaps as important as the number of jobs gained is the quality. The estimated median tech occupation wage in Wisconsin for 2019 was pegged at $68,576, which is 62% higher than the median wage for all occupations in the state.

Of potential interest to women in tech fields: Wisconsin was among the nation’s leaders, in percentage terms, in tech jobs held by women. Wisconsin tied with Iowa, South Carolina, Maine and Missouri for second place (35%) behind the District of Columbia.

The report from CompTIA examined about 50 Standard Occupational Codes, predominantly in computing, engineering and telecommunications. Cyberstates has tracked the progress of the U.S. tech economy since the late 1990s.

Overall, the manufacturing industry was the only sector to add more jobs to Wisconsin’s economy in 2019.

However, 2019 was a very different year than 2020, which has so far been characterized by economic disruption and massive unemployment. Where will those displaced workers go? A return to retail, service and hospitality may not be possible for many, which means thousands will need reskilling for new careers.

Providing those opportunities for training may prove to be a function of public-private partnerships in sectors where growth is most likely to take place. The last decade has demonstrated that tech is one of those sectors for Wisconsin. Building on that foundation shouldn’t be overlooked by policymakers during the recovery.