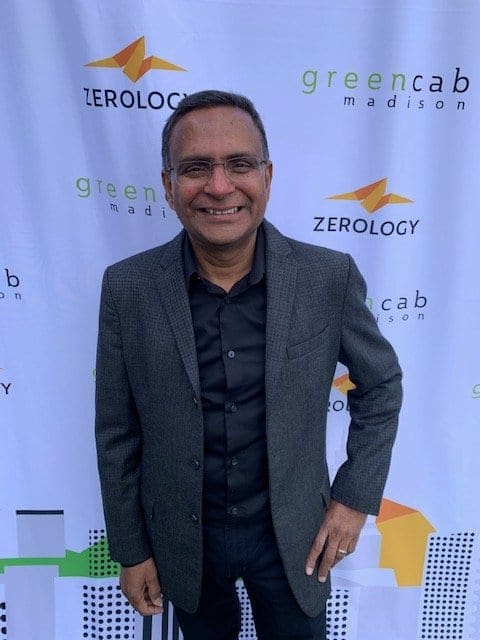 MADISON, Wis. – It was significant enough that startup Zerology launched its partnership with Madison’s Green Cab Co. by unveiling a fleet of 20 all-electric Tesla Model 3 cars that will soon be ferrying passengers citywide.

It was a bonus that Zerology and Green Cab are motivated by cutting tailpipe emissions to zero – hence the startup’s name – and making money doing so by providing sleek, silent rides to customers who appreciate the upscale taxi experience.

Behind that compelling story is another narrative, however, that speaks to why some cities and states succeed in building a startup economy and others do not: When entrepreneurs make money and plow some of it back into the community where they live, good things happen.

The founder and chief executive officer of Zerology is Shree Kalluri, who spent much of his career building Forte Research Systems on Madison’s far West Side. The company specializes in clinical trial, research and data management for cancer centers, academic medical centers and other health systems.

Kalluri sold Forte in September to Advarra, a global firm that provides related quality, compliance and safety services to companies in the pharmaceutical, biotechnology and medical device worlds. Kalluri’s exit from Forte meant he and others made a lot of money, about $5 million of which he has invested so far in Zerology.

At an Oct. 16 unveiling event, Kalluri talked about his passion for making cities cleaner and more livable by combining electric vehicles and ride-sharing technologies. What better place to incubate Zerology, Kalluri said, than the city and region that helped to make him a success.

“Exits” such as the Forte sale, which brings a world leader in research compliance systems to Wisconsin in Advarra, are often what drive an entrepreneurial economy. Such mergers or acquisitions can attract other major companies to a city or state where few connections existed in the past.

A few examples in Madison alone include Fujifilm and Cellular Dynamics, Mallinckrodt and Stratatech, and Ethicon and NeuWave Medical.

Commenting on the NeuWave acquisition at the time, veteran investor John Neis described what such acquisitions bring to a local economy.

“The best way to attract big companies to our state is to create small rapidly growing businesses they want to own,” said Neis, managing director for Venture Investors LLC. “There is no guarantee that they will stay here, but any economic development professional will tell you that it is easier to persuade an incumbent to stay and grow than get them to move here in a bidding war because there are costs and risks including loss of key personnel if they move.”

Several of the principals in NeuWave have gone on the start other companies, bringing even more value to the Wisconsin economy.

“Many employees at NeuWave came from big medical device companies and caught the entrepreneurial bug, enjoying the excitement of making a big impact in an innovative small company,” Neis said.

Some successful entrepreneurs become investors. One Wisconsin example is Mark Bakken, who founded HealthX Ventures in Madison after exiting from Nordic Consulting, which provides consulting services to health organizations using Epic Systems software. HealthX has invested in more than a dozen young companies, including a handful of up-and-coming digital health firms in Wisconsin. Had not Bakken been a successful entrepreneur himself, those investments would not have happened.

Other examples include Thomas “Rock” Mackie and Paul Reckwerdt, who started TomoTherapy and have since been involved in other young tech companies after TomoTherapy was acquired by Accuray. California-based Accuray has added to the foundation built by TomoTherapy, grown its production facilities and introduced yet another major health-tech player to Wisconsin.

Zerology is an innovative addition to Wisconsin’s mix of startup companies, but it might not have been born if Shree Kalluri and others had failed to make Forte Research Systems an attractive acquisition target. In a dynamic early stage economy, some investments keep paying off.