InsideWis: Here are science and tech priorities that will face the next president 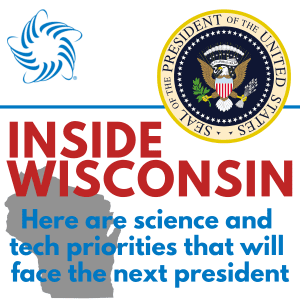 MADISON, Wis. – No matter who wins Nov. 3, the next president of the United States will have plenty on his “to-do” list when it comes to science and technology initiatives. At the risk of injecting actual policy issues into the campaign with only days remaining, here are some examples:

Tamp down on COVID-19 while girding for what’s next: With nearly 150 vaccine candidates in the pipeline, the odds are strong that someone will come up with a vaccine that is roughly 50 percent effective. Will skeptical people trust it? Who gets it first? Will it offer long-term protection or, like most other vaccines, require regular boosters? Beyond the vaccine quest is the goal of coming up with therapeutics that can save lives and limit suffering once people get sick, which would rebuild confidence among people who are scared to venture out.

Longer term, the United States can’t get caught short again if other viruses or threats such as growing antibiotic resistance take the place of the coronavirus. That brings me to…

Restore and “reshore” essential parts of the preparedness chain. Make sure the federal pandemic preparedness office, which began to wind down in 2017, has what it needs to function. Rebuild the supply chain for personal protective equipment so that America isn’t so reliant on other nations. Listen to the experts when they sound alarms. No one wants to panic people; just give them straight information that can help them and their families.

Embrace a national solution to data privacy. The United States was a leader in data privacy laws decades ago, but not enough is being done at the federal level today to prevent personal information from being misused. The European Union’s General Data Protection Regulation aims to harmonize privacy laws across the EU, but critics say it continues practices that have long stifled innovation in Europe. China’s data privacy protocol is even more far-reaching and, some argue, even dangerous, given fears of cyber-snooping on U.S. tech companies.

The next president and Congress should adopt federal standards that would pre-empt 50 different state privacy laws, an outcome that would make a mess of interstate commerce while confusing consumers.

Extend the reach of competitive broadband: There may never be 100 percent internet coverage in America because too many people live in remote places and prefer to do so. However, many rural communities (and a few digital deserts in big cities) don’t have competitive choices for downloading and uploading data. The federal government should consider a full range of internet technologies, not just expensive optic fiber, so that more people can get the service they need to connect with commerce, schools and healthcare.

Build on agreements that enhance digital trade: A lot of people believed the North American Free Trade Agreement has outlived its usefulness after 25 years, so the U.S.-Mexico-Canada Agreement was passed to take its place. That largely bipartisan trade deal can be good for traditional exporters, but also tech-related equipment, products and services. Directly and indirectly, Wisconsin relies on trade. The next president and Congress should make sure USMCA works as envisioned. While they’re at it, let’s figure out a verifiable trade relationship with China.

The act envisions partnerships between universities, government and industry, with 10 interdisciplinary research hubs to transfer science and technology into innovative goods and services while boosting metro, state and regional economies.

The Endless Frontier Act is a big vision involving some big bucks, but it’s worth the debate … especially if you believe the next four years are critical to putting the U.S. economy back on track for 21st century primacy.