InsideWis: If and when you get the chance, COVID-19 vaccination makes historic sense 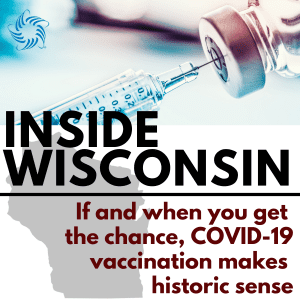 MADISON, Wis. – If you are among the half of all Americans who are leaning against or not sure about getting a COVID-19 vaccination, relax: Chances are pretty good you can’t get a shot until spring, anyway.

That gives you plenty of time to think about why you’re opposed or wavering – and to watch what happens as the first vaccination waves play out.

There are a mix of reasons why many people are on the fence about getting vaccinated. A quarter of all Americans recently told national pollsters they’re not worried about getting the coronavirus, despite 300,000 reasons to reconsider.

Other people would rather wait and see how front-line health workers in the United States react to the Pfizer vaccine rollout. Others might watch for early results in the United Kingdom and Canada. Still others might fret that “Operation Warp Speed,” as President Trump called the multi-billion-dollar vaccine push, cut a corner somewhere along the line. Sophisticated science-watchers might hold out for the Moderna vaccine, which flips switches differently in the human immune system.

There are also significant numbers of people who still believe vaccines are useless and even dangerous, despite more than 200 years of evidence to the contrary.

Not that vaccine opponents place much stock in World Health Organization pronouncements, but a WHO bulletin in 2008 concluded that vaccines have done more to reduce deaths, disabilities, and illness than any public health advance in history except for clean water.

Starting with Edward Jenner’s makeshift smallpox vaccinations in 1796, the science of stimulating production of natural antibodies to provide diseases immunity progressed slowly at first. The pace quickened in the 20th century as science made large-scale production possible.

Breakthroughs included pertussis (1914), diphtheria (1926) and tetanus (1938), which were combined in one vaccine in 1948. Influenza vaccines have been around since the 1940s. The licensing of Dr. Jonas Salk’s polio vaccine in 1955 prompted a nationwide sigh of relief among parents who worried their children would come down with this crippling disease. The 1960s brought vaccines for measles (1963), mumps (1967) and rubella (1969), also combined into a single vaccine in 1971.

Succeeding decades saw the introduction of vaccines for hepatitis B and A, pneumonia, shingles and more. Perhaps it was the proliferation of vaccines that led to people asking whether too many treatments could compromise immune systems, alter DNA or trigger other reactions, but the evidence suggests otherwise.

Some diseases have been eradicated or nearly so; others have been held largely in check. Unfortunately, public memories don’t extend back to a time when the diseases targeted by modern vaccines caused widespread misery and death – especially among children.

Today’s vaccines are tested rigorously by the U.S. Food and Drug Administration, which with the oversight of its external review boards, is the world’s gold standard. Of course, no vaccine is 100 percent effective, very few are “one-and-done” injections and no clinical trial can involve enough people to ensure zero side-effects for everyone.

Within those parameters, the prospects for a safe and largely effective COVID-19 vaccine are very strong. Such vaccines cannot help, however, if they remain inside a vial and not in your body.

Even if you’re cautious for various health reasons, think about the economic impact of reasonably widespread COVID-19 vaccinations. Public confidence will rebuild, businesses of all types can get back to business, and many jobs sidelined by the virus may return. You can be skeptical about science and still want life to return somewhat to normal.

Take your time. Examine the facts. Message your healthcare provider. By the time it’s your turn to get vaccinated for COVID-19, you’ll likely conclude that vaccine history is safely and effectively on your side.