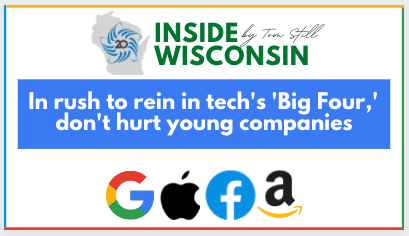 MADISON, Wis. – “Big Tech” has gone from hero to villain in the minds of many in a matter of a few years, and not for irrational reasons. Data privacy concerns, “big brotherism,” hate speech and perceived censorship on social media platforms are all part of the mix.

You know it has reached a flash point when antipathy toward Big Tech has got Republicans and Democrats working together.

In their zeal to pass anti-trust legislation aimed at the likes of Apple, Google, Facebook and Amazon, policymakers in Washington should be careful not to make life even more difficult for emerging tech companies.

Unintended consequences are emerging in the Platform Competition and Opportunity Act of 2021, the anti-trust bill that cleared the House Judiciary Committee June 23 on a bipartisan vote. Because the bill bars company acquisitions by online firms with huge numbers of monthly users, major annual sales or market capitalization above $600 billion, critics are warning of a trickle-down effect on young companies.

“For entrepreneurs, an acquisition of their company is the most likely liquidity opportunity and is necessary to make startup investment attractive relative to other asset classes…,” wrote Bobby Franklin, head of the National Venture Capital Association, in a June 21 letter to Congress. “Barring acquisitions of companies by select acquirers would close the door to this opportunity for many startups, depressing the economics of startup investment and therefore creating a significant disincentive for new company formation, job creation and innovation in our country.”

Young companies backed by angel or venture capital have three pathways: Becoming a stand-alone company, perhaps through an “initial public offering” if they’re ambitious about growth; merger or acquisition; or going out of business. Because IPOs are not easy and don’t often happen (in part because of past congressional “reform”), merger or acquisition are the successful routes most often followed.

Over the past 10 years, the ratio of acquisitions to IPOs is about 13 to 1 for venture-backed companies. Investors in such companies don’t want possible acquirers to be eliminated, regardless of size, and many entrepreneurs also worry about what that means for their long-term plans.

“Many entrepreneurs and investors begin the company-building process with the hope of creating a stand-alone, public company,” Franklin wrote. “However, in most cases, an IPO is not possible and the only available exit opportunity becomes an acquisition by another company.”

The economics are tied to supply and demand: Fewer potential acquirers can mean a lower sales price for the company due to fewer bidders, which means lower returns for the entrepreneurs and the investors alike.

Franklin said the bill, if passed in its current form, would especially hurt young companies in emerging hubs of venture-backed firms and not just those in traditional clusters such as California’s Silicon Valley. That is a good reason for members of Wisconsin’s congressional delegation, as well as others in the Midwest, to be wary of the bill.

“In recent years, startup and venture capital activity has seen impressive growth off the coasts, thereby spreading entrepreneurial activity into new pockets of the country,” Franklin wrote. “But because companies in these regions do not tend to grow large enough to go (public), acquisitions are the far more common exit opportunity. (House Resolution) 3826 would endanger the recent growth in emerging ecosystems by closing off potential acquirers of startups.”

Acquisitions of Wisconsin startups over time have kept many of those companies and core teams in place and introduced larger players to the state, such as Roche, Johnson & Johnson, Merck and others. It can work the other way, as well, with Wisconsin startups moving elsewhere, but even when that happens those founders usually remain in the state – with money to reinvest in their next venture.

Of course, Franklin and the NVCA have a vested interest in not seeing potential acquirers of venture-backed companies blacklisted. That doesn’t change the fact that market economics can be easily upset by legislation that doesn’t recognize the risk to small companies downstream to Big Tech.

For sins real and imagined, Big Tech has found itself in the crosshairs of many members of Congress. Lawmakers should be careful not to include startups in the target.