MADISON, Wis. – Wisconsin’s small-business economy is diverse. It is creative. It is under stress due to the unrelenting nature of COVID-19. 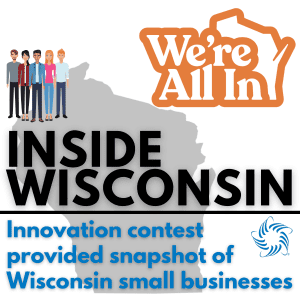 Those observations stem from the Wisconsin Technology Council’s recent involvement in the $3 million “We’re All Innovating” contest sponsored by the Wisconsin Economic Development Corp., the results of which were announced Dec. 7 by Gov. Tony Evers. Our team helped organize the front end of the contest – functions such as outreach, collecting entries and judging – via a platform used for years to run the statewide Governor’s Business Plan Contest.

“We’re All Innovating” was truly a statewide competition, as well as a revealing glimpse at the range, innovative spirit and survival instincts of small business owners and operators in Wisconsin.

Qualified entries came from 1,226 for-profit businesses located in 70 of Wisconsin’s 72 counties. Those entries represented 68 different industry sectors as identified by standard codes. No business was larger than 50 full-time equivalent employees; most were much smaller. Most entries came from individual owners versus some other corporate entity; about half were majority-owned by women and about 15% by people from non-white backgrounds.

They competed for grants in three broad categories – health tech, business tech and operations – organized by employee size. More than 180 judges were part of a rotation that reviewed plans, scoring each on factors that were laid out in advance for contestants to see. In the end, the 231 award winners announced by WEDC hailed from 48 of 72 counties.

The heart of the contest was tied to how each company had pivoted after COVID-19 settled into Wisconsin in the early spring of 2020. Approaches varied depending on what type of business was involved, but common threads were innovation, perseverance and understanding how business survival touched people within and beyond their own operations. Some examples:

Many small businesses are struggling. Some are even being scape-goated despite their best efforts to keep people safe while keeping their own doors open. The “We’re All Innovating” contest provided literally hundreds of examples of how small businesses are a part of the COVID-19 solution, not the problem.