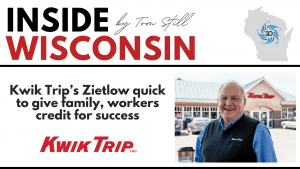 MADISON, Wis. – Is there anyone in Wisconsin who didn’t visit a Kwik Trip convenience store sometime during the COVID-19 year? Judging by the numbers, probably not.

Each week, nearly 9 million people pull into one of the 768 Kwik Trip, Kwik Star and Stop-N-Go stores operating in Wisconsin, Minnesota, Iowa and Illinois for needs that range from gasoline to coffee, from donuts to bananas, and from milk to a car wash. During the peak of the pandemic, those millions of customers could count on being served by mask-wearing employees in a regularly cleaned store.

Such is the retail empire that Don Zietlow still presides over as president and chief executive officer, 50-plus years after its founding in Eau Claire. It’s a story that will lead to his receiving the annual “Ken Hendricks Memorial Seize the Day Award” during the June 3 Wisconsin Entrepreneurs’ Conference.

While Zietlow may not have envisioned today’s vertically integrated, tech-savvy Kwik Trip when his family and the John Hansen family were just starting out, it has become a ubiquitous force in 350 Midwest communities. During a recent interview in which I informed Zietlow that our conference steering committee had selected him for the 17th annual award, his first reaction was to say he really didn’t deserve it.

“It’s all about our co-workers and our family. They do all the hard work,” he said.

“Co-workers” is the term for Kwik Trip’s 30,000 employees, many of which staff its growing fleet of stores – about 40 more will be built this year, with Michigan on the expansion list – but others are part of the supply chain that stocks them.

Based in La Crosse, Kwik Trip makes and ships about 80% of its own branded products, such as sandwiches, baked goods, milk, yogurt, pizzas and more. They are produced in highly automated facilities totaling about 800,000 square feet and delivered by trucks largely converted to run on compressed natural gas. They wind up in stores built to standards that conserve water, electricity and rely on recycled materials where possible.

About 80% of Kwik Trip’s 341 car washes use reverse osmosis reclaim water, which saves billions of gallons of fresh water per year.

The company recycles 2,300 tons of cardboard per year, as well as 133 tons of shrink wrap and nearly 26,000 tons of mixed materials. About 10% of its stores contribute to solar energy production. Kwik Trip’s customer reward system is another facet of its technology footprint.

Are there dissatisfied workers who don’t like how some things are run? With 30,000 people, that’s inevitable, but the company made Glassdoor’s “100 Best Places to Work” list for 2021.

The “Seize the Day” award from the Wisconsin Technology Council has singled out a mix of entrepreneurs over time, from people who started large companies to smaller success stories, and from younger ‘treps to people such as Zietlow who were entrepreneurs before the word was fashionable.

What binds them together is the vision, persistence and resourceful to see things through when it gets tough. Don Zietlow may be too humble to admit it, but that describes him pretty well.