InsideWis: Newspapers in crisis: Why their economic future matters for our democracy 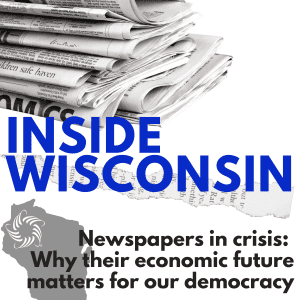 MADISON – It’s the ideal hand-held communications tool for the 21st century: It’s portable, carries easily segmented global, national and local news, is updated regularly by professionals dedicated to filtering and editing mounds of information, isn’t controlled by the Chinese or the Russians, and requires no external power source other than natural or room lighting.

It’s called a newspaper. So why does a product that can be described in such trendy terms seem like… well, yesterday’s news?

For reasons that range from COVID-19 to the rise of the internet to the changing reading habits of Americans, general-circulation newspapers are caught in a survival crisis like none since the Depression. Sadly, many people wouldn’t notice or even care if their local paper fades away, but a democratic society should pay attention.

Nationally and in Wisconsin, many newspapers are dealing with double-digit declines in earnings. Classified advertising, especially employment ads, have dropped for years due to digital competition. The effects of COVID-19 have cut into some types of display ads. Evening newspaper circulation overall began to decline in the 1970s as more evening papers died, according to the Pew Research Center, and Sunday circulation began to drop in the late 1980s.

By 1989, total newspaper circulation began to decline, and in 2000 the last holdout, weekday morning circulation, also began to slip.

From a business standpoint, some newspaper companies brought on these problems by their own actions – or inactions. Some publicly owned newspaper chains failed to reinvest or were slow to embrace trends such as newsroom convergence, which is the notion of using other mediums (primarily internet) to deliver news and information.

Not unlike the Big Three automakers in Detroit, some newspapers didn’t work to retain the brand loyalty of the next generation. Industry-wide programs such as “Newspapers in Education,” which delivered free newspapers to schools as a teaching tool, were usually poorly funded afterthoughts. And, yes, some newspaper editors lost touch with their own communities.

Many newspapers have reacted by cutting news space, newsroom staffs or both. That may be the only short-term option, particularly for publicly traded newspapers worried about debt loads and the next quarterly report. However, the long-term strategy should be the opposite: Deliver high-quality news and information, regardless of whether the medium is print or digital.

The age of 24-hour news can be both an enemy and a friend to newspapers. It’s an enemy because it buries the notion that a morning newspaper thumped on your doorstep always contains the latest news.

It can be a friend for those newspapers (more accurately, newsrooms) that recognize they can offer depth, perspective and double-checked facts that broadcast and other sources usually cannot.

Newspaper newsrooms are filled with reporters and editors who know how to sort through rumor, spin and outright misinformation. Those same newsrooms have a collective institutional memory that can’t be found elsewhere in most communities.

Many people will ask: What’s wrong with getting my news from internet sites that aren’t aligned with traditional news sources? That’s fine if your goals are immediacy, downloading news to a hand-held device and “personalizing” your news by eliminating that which you consider irrelevant or politically disagreeable.

However, don’t expect Fox News or MSNBC to cover the local school board meeting, to track problems at the city water utility or even write about Junior’s big game against Rydell High. Don’t expect them to smell a rat in your state Capitol, review the amateur theater production or recognize a big community story in the making. That’s not what many online news aggregation sites do well – and likely never will.

Many newspapers are reinventing themselves, from how they are delivered to how they appeal to today’s fragmented markets. In fact, digital advertising is on the rise as newspaper companies remake their business models. For Main Street businesses hoping to rebuild in the wake of the pandemic, it makes sense to use local venues to reach their audiences – at home and well beyond.

One thing that shouldn’t change, however, is the role of news media in a free society. In an era when some people brand all mainstream reporting as “fake news,” or inflame emotions via social media “deep fakes,” well-written and adroitly edited news from a trusted source can make democracy and civic discourse go better.

The November election will test whether newspapers and their online affiliates can sift fact from fake in ways that inform rather than confuse voters. That old-fashioned hand-held device might come in handy.