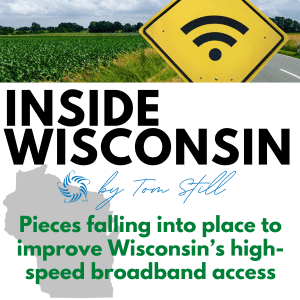 MADISON, Wis. – When Gov. Tony Evers declared 2021 to be the “Year of Broadband Access” in Wisconsin, that line in his annual State of the State speech likely resonated with people statewide, especially those living and working in rural Wisconsin.

As Evers and others familiar with the size of the broadband challenge know, it will take more than a year to connect people in the state’s communications deserts to competitive, high-speed internet. Still, the elements are in place to dramatically improve access within the decade.

Evers announced Jan. 12 he wants state government to invest $200 million in broadband infrastructure, the details of which have yet to emerge but may likely be included in his 2021-2023 budget proposal. It could expand on the state’s existing broadband expansion grant program, which is run by the Public Service Commission.

That effort has led to 210 grants since 2014 to qualified applicants who have connected, or will soon connect, more than 7,000 businesses and 117,000 homes to high-speed internet. The PSC recently received 124 requests totaling $62 million for the remaining $24 million in the current state budget, so demand is running well ahead of supply. Matching dollars from applicants are typically needed to lever the value of the grant.

This year will see the official end of the federal Connect America Fund 2 in Wisconsin. Only California among the 50 states received more federal dollars than Wisconsin over four years to enhance broadband downloads and uploads in places that are isolated and otherwise underserved. About $570 million was allotted over six years to three providers – CenturyLink, Frontier and AT&T, in order of competitive grant size – to augment private investments in broadband by those same companies.

The federal broadband investment in Wisconsin and elsewhere is far from over, however.

The Federal Communications Commission created a $20.4 billion Rural Digital Opportunity Fund in mid-2019 that aims to bring high-speed, fixed broadband service to rural homes and small businesses that lack it. It will build on CAF 2 through a two-part “auction” process targeting census blocks that are entirely unserved or partially so.

The first auction in Wisconsin resulted in 14 winning bids, although each entity must complete a “long-form” application to the FCC to demonstrate they can do what they pledge to do over the 10-year life of the program. The Wisconsin dollars in the FCC program stand to be concentrated with two players, CCO Holdings LLC, which is an indirect subsidiary of Charter Communications, and LTD Broadband LLC, which currently does business in Minnesota, Iowa and Nebraska.

Another federal investment was contained in the $900 billion COVID-19 relief package passed by Congress in late December. That bill sets aside $7 billion for broadband initiatives in states and communities across the United States.

The biggest chunk is $3.2 billion to create an Emergency Broadband Benefit Program for low-income people. Other projects include $1 billion for tribal lands, of which Wisconsin has spread across 11 major locations; $300 million for competitive grants; $285 million for communities with large minority populations; $250 million for telehealth programs; $100 million for distance learning; $1.9 billion for cybersecurity equipment and money for broadband mapping.

The trick is making these various state, federal and private programs work together efficiently.

“There are a lot of tools in the toolbox. That’s good, because not any single tool will work for all circumstances,” said one broadband expert. “It’s really a matter of which technology plans will pan out, which plans can connect the most people, and which will do so most efficiently. Everyone involved will want to make the best use of the dollars and not duplicate effort.”

Year of Broadband Access? Yes, but it will take a bit longer than 2021 to pull Wisconsin up in the 50-state standings.