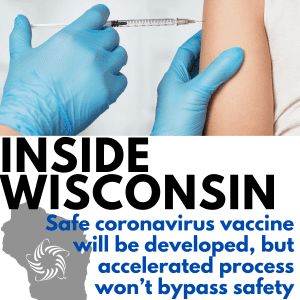 MADISON, Wis. –  Although tests have been restarted, some may still question whether the adverse reaction reported by a subject in the AstraZeneca-led vaccine trial is linked to the coronavirus test vaccination itself or some other cause.

However, this much has always been known: Producing a safe vaccine for any disease or condition is hard and cannot be rushed for safety reasons, if nothing else.

That’s why all vaccines go through rigorous, phased reviews that usually involve thousands of subjects who are dosed or given placebos under carefully watched conditions. Adverse reactions are not uncommon in early stage vaccine trials, and they’re often unrelated to the treatment being tested. In the end, only one in four vaccines that enter human trials reach the market.

In fact, with 47 coronavirus vaccines in either Phase 1 (safety and dosage), Phase 2 (expanded safety) or Phase 3 (efficacy) trials around the world, it’s almost surprising there haven’t been more reports of adverse reactions. It happens.

When it does happen, there is a well-worn path for dealing with it, with organizations such as the Centers of Disease Control, the National Institutes for Health and the Food Drug Administration all taking an interest in calling a “time out.”

That’s what is taking place in the AstraZeneca and Oxford University trial. Because the latest report happened during a combined Phase 2 and Phase 3 trial, the referees correctly blew the whistle – as did the British-based researchers themselves.

“Serious side effects during a Phase 3 trial are not common,” said Dr. James Conway, a UW-Madison professor and physician who has been leader over time in the American Academy of Pediatrics for immunization and infectious disease strategies.

“The whole purpose of gradually advancing from Phase 1 to Phase 2 is to tease those things out,” Dr. Conway added. “The problem here is that they are essentially doing a combination (trial) in trying to speed things up. Because they are rapidly moving towards trying to immunize 30,000 subjects to simultaneously test efficacy and safety, this is a little more significant – and hence why all the studies have been put on hold.”

Does this mean a vaccine for the SARS-CoV-2 (coronavirus) strain behind the worldwide pandemic is out of reach? Not at all. Experts such as Dr. Conway and others think a vaccine will eventually be available, in part because so many researchers and companies are taking shots on goal – with billions of dollars behind the collective effort.

Still at question is which vaccine or vaccines will emerge as solutions, given the billions of doses that will likely be needed if public confidence in the final products is upheld.

In a recent discussion hosted by the Metropolitan Milwaukee Association of Commerce, the president of the Medical College of Wisconsin said he plans “to get whatever vaccine is available on the market first.”

That’s because Dr. John Raymond trusts the process will weed out vaccines that aren’t safe or effective.

“American vaccine makers make safe vaccines,” he said. “I don’t believe that there would be significant problems with contamination.”

Leading vaccines in trials today don’t use the live virus, Dr, Raymond noted, so there won’t be problems with the chemicals used to inactivate the virus or the incomplete inactivation of the virus itself. Some of the most promising vaccines in the pipeline use messenger RNA to induce antibodies that bind to potential pathogens, such as the real virus.

That still leaves plenty of unknowns, experts in Wisconsin and elsewhere agree. How many doses would be required? Very few vaccines are “one-and-done,” meaning repeated doses may be needed over time. What are the long-term effects? Most subjects are taking part in trials measured in months versus years, which is more often the case.

The hold on vaccine trials isn’t what anyone wants to hear, given the nearly 200,000 deaths in the United States thus far and nearly 900,000 reported fatalities worldwide. However, getting it right is more important than getting it fast, even during a pandemic. Public confidence requires it.