InsideWis: To compel worker vaccinations or not: Businesses may be forced to choose 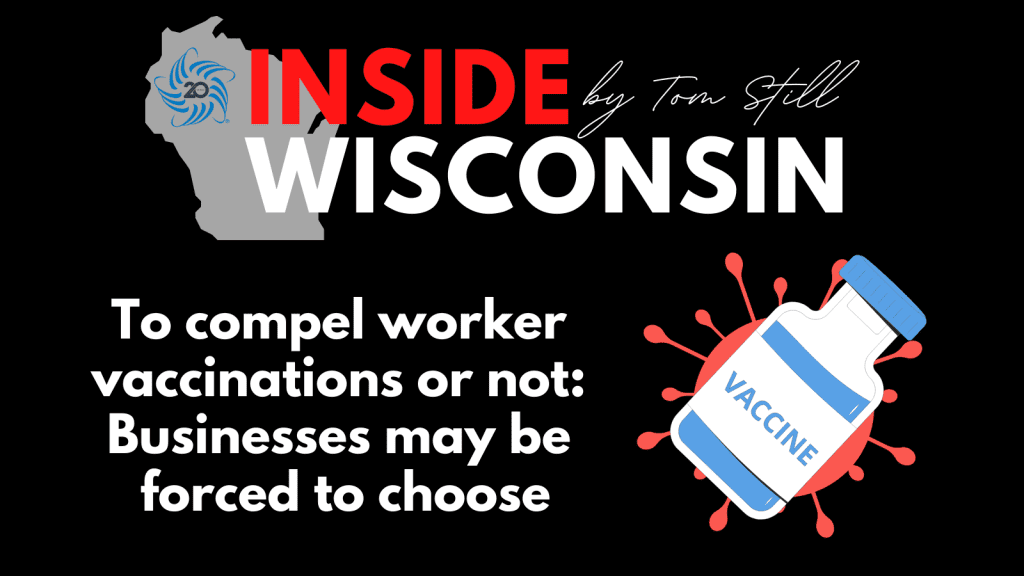 For many business owners and managers, the question of whether to require worker vaccinations against COVID-19 once seemed an easy choice: With so many people lined up for vaccine shots when they were first released, it appeared simple encouragement and maybe a few incentives would be enough to get people safely back to work.

Those days are quickly coming to an end.

The mandatory shot scenario has resurfaced among private companies due to the spread of the Delta variant; stubborn vaccine hesitancy in parts of the country and Wisconsin; and fear of exposing all workers, their families, customers and vendors to COVID-19. Many businesses will once again consider requiring employee vaccinations or regular testing if those employees refuse.

Make no mistake: For most of those who refuse and who don’t qualify for specific exemptions, the law says they can be fired.

Across the country, governments, health systems and major companies such a Google and Facebook are moving to require vaccinations or regular testing. The federal Equal Opportunities Commission has made it clear firing is an option companies can pursue – which is precisely what a Texas health system did July 27 within its workforce, dismissing or accepting resignations from 153 employees who refused to get a shot.

At a time when it’s hard to find good healthcare workers, firing those who refused to get a shot may seem drastic. Then again, it’s a strong signal to jittery patients and the remaining 24,800 vaccinated employees of Houston Methodist that individual choice has its limits.

“It’s like any other job requirement,” said Sheila Conroy, a partner in Lake Effect HR & Law, a Madison-based firm that specializes in employment law and human resources. “If you’re required to wear steel-toed boots on the job and you refuse to do so because you don’t like how they look, you could be disciplined or fired for that, too.”

Conroy isn’t suggesting all employers should follow a “vax-or-vamoose” course with workers. In fact, she thinks it’s a complicated choice that depends on many variables – the nature of the workforce and workplace; navigating proper “accommodations” for employees with medical conditions or “sincerely held religious beliefs;” union relations; geography; and fear of losing otherwise good employees are examples.

Still, for those businesses that thought a voluntary approach was going to do the trick, it has become apparent that “Plan B” is fast becoming an option.

“It was really clear from the get-go that employers could require vaccinations within established parameters, but I think most (employers) believed that with strong encouragement and some incentives, most of their employees would get the vaccine,” Conroy said. “There was more resistance than some employers anticipated.”

While many employers were aware as early as the spring that it was legal to fire employees who refused to vaccinate or test routinely, most didn’t want the hassle of setting up a mandatory system or the risk of a court challenge. Now, with more companies drawing the vaccination line, others may draw comfort in knowing they’re not alone.

“They’re getting more reassurance by the day that they’re not going to be left hanging out there,” said Conroy, who noted that government entities requiring vaccines of their own workers aren’t going to prevent private employers who follow the rules from doing the same.

In fact, the Houston Methodist firings were preceded by a federal court decision that confirmed it was legal for the hospital system to set vaccination requirements as a condition of employment – even if the vaccines are still deemed “emergency use” by the Food and Drug Administration. An emergency use authorization can be made by the FDA, after testing regimens have been completed, to facilitate medical counter measures during public health emergencies.

Not every company can have workers who are “remote.” Many companies need workers back on the factory floor or behind the counter and may choose to require vaccinations or regular testing sooner than later. While that is a potential problem for companies already hard-pressed to find workers, that shortage may ease in the fall when extra federal jobless benefits expire.

No one should want the economy to slide back into the mess it was in early 2020, especially those companies that form its backbone.