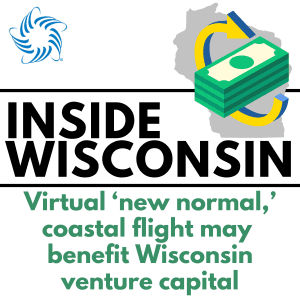 MADISON, Wis. – Wisconsin is making progress in attracting early stage capital for its young companies. The question is how it could do a lot better.

That theme emerged during the virtual Wisconsin Early Stage Symposium, which spanned parts of Nov. 9, 10 and 11 and involved entrepreneurs pitching their ideas, investors meeting with them to learn more, and broader conversations about what makes angel and venture capitalists want to invest in Wisconsin companies.

Fortunately, those investors have been doing so in recent years. Total investments have been climbing somewhat steadily, from $209.5 million in 2015 to $454.4 million in 2019. The full investment picture for 2020 in Wisconsin or elsewhere won’t be known until the new year, but it already appears it won’t be the disaster predicted when the COVID-19 pandemic started in March.

In fact, some of the investors who spoke during the conference said the “new normal” of virtual meetings has made them more efficient, allowing them to engage with more young companies and wind up with more choices about where to put their money.

Similarly, the switch to more virtual settings has reinforced notions that investors and young companies need not be all clustered in a few hot spots, such as California’s Silicon Valley.

“There has no doubt been a huge exodus from the traditional tech hubs,” said Jason Franklin of the WVV Fund, a relatively new player in Wisconsin with four corporate partners. That’s not just talent in the sense of technicians, he continued, but with company builders and managers who can choose to work just about anywhere so long as they are digitally connected. “The spread and flow of information now is going to be better than ever.”

Franklin, who studied computer science, mathematics and business at UW-Madison, runs the WVV Fund with one foot in California and one in Wisconsin. He isn’t bounded by geography in his investment decisions – and believes other investors are beginning to feel the same.

The days of investors only wanting to invest in a company “if they could throw a rock and hit it from their office” are “changing faster than ever,” Franklin said. When investors look beyond what’s next door in Silicon Valley, he said, that’s an advantage for young companies in Midwest states such as Wisconsin.

“Amazing companies are being built everywhere,” said Ron Watson of Dundee Venture Capital, which has offices in Minnesota’s Twin Cities, Chicago, Omaha and St. Louis. “People with those (company building) skills are moving all over the country.”

Watson, Jonathan Ellis of Chicago’s Sandalphon Capital and Candice Matthews Brackeen of Cincinnati’s Lightship Capital anchored a discussion on how the state is viewed by investors beyond its borders. They talked about meeting with quality emerging companies in Wisconsin, as well as across the region, and their appetites for seeing more have been whetted.

“There is something happening in Wisconsin where the entrepreneurs know, ‘Before I get any capital (from an investor) I need to prove that I can actually do this’ instead of just saying, ‘I started a company so write me a check.’ That’s what more entrepreneurs need to know,” Brackeen said. “That’s what I saw a lot of (at the conference). I am really heartened that is happening statewide in Wisconsin.”

The state of Wisconsin has added investor tax credits and modestly backed a public-private fund, the Badger Fund of Funds, which is investing statewide. It has taken other steps over time to produce a friendlier environment for young, especially tech-based companies.

What’s missing is a broader commitment to the “big next step,” such as Michigan’s Renaissance Fund, Cincinnati’s Cintrifuse or Indiana’s Next Level Fund. The pandemic put a crimp in some plans that were in place, but there is no longer a need to wait. In fact, the timing may be better than ever for Wisconsin.