InsideWis: Wisconsin captured national eye in election; can it do so now with COVID fight? 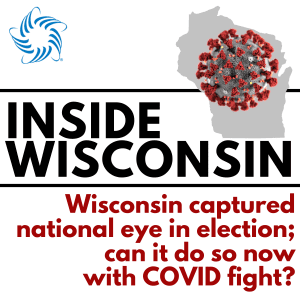 MADISON, Wis. – As one of the vaunted “battleground states” in the 2020 presidential election, Wisconsin found itself a center of attention among people who before Nov. 3 may have been hard-pressed to place it on a U.S. map … red state, blue state or shades of purple.

The Wisconsin economy would recover much faster if the state held the national eye a while longer by demonstrating it can stop the spread of COVID-19.

The renewed surge of positive cases that began around Labor Day hasn’t slowed in Wisconsin, bringing with it more hospitalizations that stress facilities and medical staffs alike, as well as deaths that are breaking previous daily records.

Wisconsin’s COVID-19 death rate is down to about 1 percent versus about 4 percent in the spring, largely because the medical profession has learned a lot about how to keep victims alive, but the sheer number of deaths has climbed because of the volume of new cases.

“Even though the death rate has steadily declined, you can’t ignore the impact of the uncontrolled surge of Wisconsin cases,” said Ann Zenk, senior vice president of the Wisconsin Hospital Association. “Wisconsin’s death rate per 100,000 population is now about four times the national average.”

That’s hardly a confidence builder for existing businesses, many of which continue to struggle to keep their doors open, or for business executives outside Wisconsin who may look elsewhere to locate or expand. If you view Wisconsin as a bizarre, non-compliant outlier in the fight against COVID, you might think twice about opening that new location.

Knowing the COVID-19 pandemic is hurting Wisconsin’s business climate and consumer confidence, many business associations have banded together under the flag of the “Stop the Spread” coalition. It has produced public service announcements, enlisting the help of marquee sports teams and respected figures to urge people to take simple prevention steps.

It may be too early to know if the campaign is working, as the message was likely lost in the avalanche of political commercials that took place before Election Day. Now, perhaps, more people will pay attention and stop viewing face masks as a political statement.

So, who is dying from COVID-19 in Wisconsin?

Of the 2,156 deaths reported as of Nov. 4, the vast majority (1,944) were people 60 and older – and 1,083 were people 80 and older. That’s been the pattern since the disease hit Wisconsin in March, but it has become more tragic as medical professionals struggle to keep it from sweeping through nursing homes and long-term care facilities.

The young and relatively young are not immune, however. There have been 202 deaths among people in the 20 to 59 age range.

More men than women have died by a 55% to 45% margin. Black people account for 12% of all Wisconsin deaths; Latinos are not far behind.

Deaths by geographic region in Wisconsin have soared in the northeast, with nearly a quarter of all deaths so far. In fact, the total number of deaths in the region broadly defined by Green Bay and the Fox Cities is almost as large as the state’s southern, western and northern regions combined. Southeast Wisconsin accounts for nearly half of all deaths.

Some additional perspective on Wisconsin’s COVID-19 deaths: The state has roughly as many people as Denmark, Finland or Norway, all countries with similar Northern Hemisphere climates, yet total deaths in those nations are 729, 259 and 282, respectively.

While restaurants, bars and schools received a lot of blame at the start of the pandemic, it’s become clear that businesses that want to survive and schools that want to educate children in person are investing heavily in precautions. There’s likely no way to prove it, but so-called “super-spreader” events – weddings, funerals, big outdoor parties, rallies and the like – may be emerging as a bigger culprit.

With the election in the rearview mirror, perhaps there is room for the “Stop the Spread” message to get through and for policymakers to work together where possible. That kind of cooperation would put Wisconsin on the map in another constructive way.